SINGAPORE - She picked up the guitar in her golden years and has since played at numerous charity events, and even launched her own album.

But on Aug 9, Madam Mary Ho, popularly known as Grandma Mary, will be rocking an electric guitar solo at the biggest stage in the country.

At 81, Madam Ho will be the oldest among the more than 3,000 performers in this year's National Day Parade (NDP), which will return to the Marina Bay Floating Platform.

The grandmother of seven, who is taking part in the NDP for the first time, said: "I feel great. It is an honour and privilege to be able to perform. I've been in Singapore all my life. The parade feels like it is my own birthday."

Madam Ho will take part in a segment celebrating the nation's unity and diversity.

The parade's youngest performer is Shaista Eman, four, and the daughter of veteran NDP host Nurul Aini. Shaista will participate in the parade's final act.

Madam Ho, who is the mother-in-law of former foreign minister George Yeo, said she first learnt to play the acoustic guitar when she was 60, by copying what she saw in books. 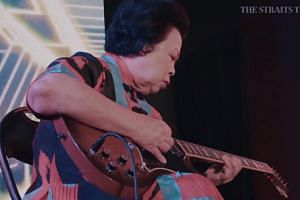 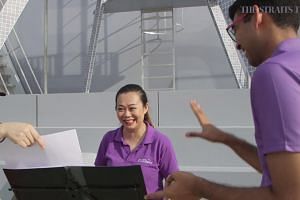 But the allure of rock and blues music made her pick up the electric guitar a few years later, said Madam Ho, who counts guitar legend Carlos Santana as one of her favourite musicians.

"I was helping to look after my grandchildren, who are now between 22 and 28 years old. Now that they're all grown up, I wanted to do something for myself."

In recent years, she has taken to the stage - sometimes for free - at various events, but Madam Ho said she is still "all nerves" before a performance.

"To me, this is the greatest show. I am playing for my country. And if you love something, you just keep going on," she added.

For her NDP performance, she learnt two songs in about a month. She has been practising daily, and about once a week with the other participants.

Said Madam Ho: "You need to keep learning new things... If an old lady like me can play the guitar, you can play it, too."

Here's a look at Madam Ho with her guitar through the years.