SINGAPORE - A new Ah Meng has been chosen as the face of the Singapore Zoo, eight years after the passing of the iconic Sumatran orang utan.

Four-year-old Ishta was picked from the late Ah Meng's six living descendants and will take on her grandmother's name.

The other five are her youngest son Satria, granddaughters Chomel and Endah, and great-grandsons Bino and Putra. 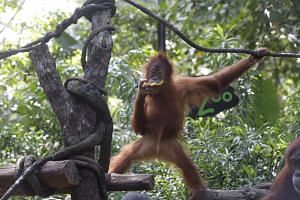 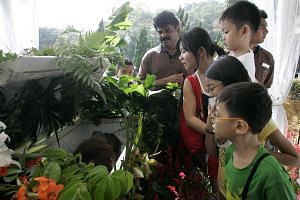 Memorial service for a Singapore icon 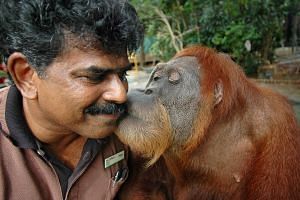 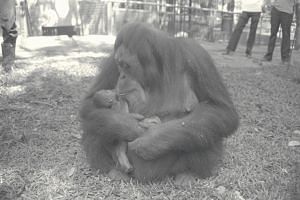 Ah Meng gets top marks for being a role model

At an announcement event at the Zoo on Friday (Feb 26), Wildlife Reserves Singapore's chief executive officer Mike Barclay said it took the zoo eight years to pick a new Ah Meng "out of respect" for the icon.

Ishta was born on March 8, 2011. She is the first offspring of Ah Meng's late daughter Sayang and Galdikas, a male orang utan from Frankfurt Zoo. Like her grandmother, she loves durians and is particular about cleanliness.

The original Ah Meng, who became popular for her friendly demeanor during breakfast sessions with visitors and met celebrities such as Michael Jackson during her tenure as animal ambassador, died on Feb 8, 2008 of old age. She was 48 at the time.

Mr Chellaiyah, who cared for Ah Meng since 1971, when she was confiscated from a family that had kept her as a pet, remembered his former companion fondly.

"Whenever I talk about Ah Meng I get quite emotional. I worked with her for 36 years. She became a household name; people would say 'I'm going to see Ah Meng', not 'I'm going to the zoo'.

"When she passed away, more than 4,000 people came for her funeral, which was amazing. I thought who would want to come to an orang utan's funeral."

Mr Chellaiyah said they would be using positive reinforcement to condition Ishta to respond to the new name.

"We will reinforce with treats; these are very intelligent animals so it's just a matter of time before she realises that she's the new Ah Meng, the new diva."

As her first official duty, the newly crowned Ah Meng will help to flag off the annual Safari Zoo Run on Saturday (Feb 27), started in 2009 in memory of her grandmother.