SINGAPORE - Confetti was showering down on a buggy carrying President Tony Tan Keng Yam and his wife Mary at this year's Chingay parade in February.

Mrs Tan leaned forward to dust off some confetti on the buggy driver's hair.

"Singaporeans will remember her fondly for her grace, empathy and warmth," he said, in a speech at the farewell reception for Dr Tan at the end of his six-year term.

Thanking Mrs Tan, 76, for her contributions and support for her husband throughout his years of public service, Mr Lee noted how she was always by Dr Tan's side as he carried out his duties as President, whether he was engaging foreign dignitaries or meeting Singaporeans from all walks of life.

"She would put everyone at ease with a friendly word and a gentle smile," he said, to murmurs of agreement from about 200 guests at the Istana. 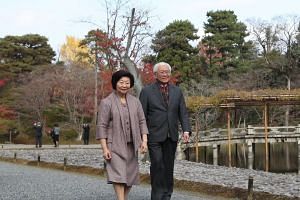 Dr Tan, 77, said his wife brought warmth to the highest office in the land.

"In this journey, I have been so blessed to share it with Mary. Throughout our marriage, she has been a tremendous source of strength and wise counsel," he said.

He added that she has been a key pillar of support, both during and before his presidency.

"She has a genuine empathy for people which has brought warmth to this Office and helped me throughout my career."