SINGAPORE - GrabFood users can now have food delivered from popular hawker stalls - like Arcade Fish Soup in the Central Business District and A Noodle Story at Amoy Street Food Centre - by placing a single order through the app.

The company officially launched its Hawker Picks service on Monday (Aug 26), which will use "Hawker Hubs" that pre-order dishes from selected stalls that are as famous for their long queues as they are for their food.

Similar to how "ghost kitchens" are operated by food delivery firms Deliveroo and Foodpanda, customers can order food from a selection of eateries in one go, including those that lie outside of the typical delivery radius.

The Hawker Hubs, however, do not feature kitchen spaces. Instead, food is prepared by hawker partners at their stalls and consolidated at the hubs, before being delivered to GrabFood customers after an order is placed.

There are about 70 stalls on board the Hawker Picks programme, which has been expanded progressively since January to GrabFood users served by five hubs in Commonwealth, River Valley, Serangoon, Bedok and Sembawang.

GrabFood Singapore head Dilip Roussenaly said the firm follows food safety guidelines similar to those of caterers to ensure that food quality is not compromised, even if consumers receive the meal hours after it is prepared.

All Hawker Picks food items are timestamped when drivers collect food from the stalls just before the lunch and dinner operating hours.

They are stored at the hubs in industrial food warmers kept at a minimum of 70 deg C, outside of the "danger zone" of 5 to 60 deg C, which causes bacteria to grow rapidly.

All food must be delivered to consumers within four hours of collection from hawkers, and meals are typically ordered and delivered within two hours of their arrival at the hub, said Mr Roussenaly.

The amount of food that GrabFood pre-orders from each hawker partner is calculated based on "historical data". Unsold food kept longer than four hours must be disposed of, though food waste is rare, he added.

Asked whether prices of menu items are the same as what consumers pay at the stalls, Mr Roussenaly said that they may differ based on factors such as demand, but did not say by how much.

While other hawker stalls on GrabFood's platform prepare orders on demand and have them collected by riders for delivery, those under the Hawker Picks programme typically feature long queues during peak hours and are unable to serve additional online demand, he said.

"Hawkers are used to the way they operate, and don't want to change it... but yet they're interested in tapping the digital space and trying to extend their reach," Mr Roussenaly said.

"Some players have tried to solve this problem, for example, by using the concierge model where they would send a delivery rider to queue and get the food for consumers, (but this) can take hours." 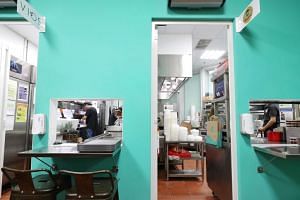 Growth of ghost kitchens in Singapore

Hawker Picks can help consumers beat long queues at popular stalls that sometimes end in disappointment when dishes sell out, he added.

Asked about food safety requirements for a system he describes as an "industry first", he said that GrabFood is in discussions with the Singapore Food Agency, and has obtained international food safety management certification for the model.