From commercial drones delivering medical supplies to hospitals and packages to homes, to an app that connects people living in the same neighbourhood, so that they can carpool on demand, maps infused with data may soon turn these possibilities into realities.

Such geospatial information is an area the Singapore Government wants to see greater use of to bring about smarter living in the city.

These maps could include the flight paths of other drones, and the location of tall buildings to avoid a collision, or the addresses of students in the same school, so that their parents could form carpools.

Located at the PSA Building in Alexandra Road, the 15,000 sq ft facility currently houses 22 of these start-ups, which the SLA hopes can solve urban logistics problems like overcrowding on Singapore roads.

"Geospatial technology generates value for the economy... The logistics and transport sectors use it significantly," said Mr Edwin Tong, Senior Minister of State for Law and Health, at the launch.

GeoWorks is an initiative under the five-year Singapore Geospatial Master Plan co-developed with GovTech, the agency behind public sector tech transformation here.

The masterplan was released in July with strategies to push the envelope in this space to help Singapore thrive in the future digital economy.

Forerunners in geospatial technology use in the private sector include ride-hailing apps Uber and Grab, which match riders with nearby drivers. Online grocer RedMart also uses smart mapping information to plan and optimise delivery routes.

Examples in the public sector include the OneService app that lets residents report municipal issues and the myResponder app, which calls qualified volunteers to suspected heart-attack cases until emergency services arrive. 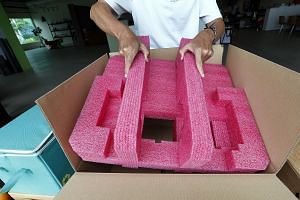 Earlier deadline for companies to report on packaging used

Garuda Robotics is in discussion with the Civil Aviation Authority of Singapore to explore flying unmanned drones without needing visual line of sight for more efficient flight management. Possible applications include the delivery of medical supplies and equipment.

More developments can be expected when Virtual Singapore, the digital map of the country rendered in virtual reality and based on real-time dynamic data, is launched by the end of this year.