The Government's shift to the left in social and economic policies began almost a decade ago, well before 2011, Deputy Prime Minister and Finance Minister Tharman Shanmugaratnam said yesterday.

In a special lecture to the Economic Society of Singapore, he sought to debunk the myth that this shift was precipitated by electoral losses in the 2011 General Election.

"The world did not start in 2011," he said. "We made very clear our intentions and motivations in 2007, (stated that) it was going to be a multi-year strategy and, step by step, starting from the kids when they are young, through working life and into the senior years, we have been moving towards a more inclusive society, step by step. We intend to continue on this journey, learning from experience and improving where we can." 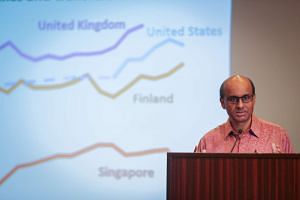 Mr Tharman cited how government transfers to the bottom one-fifth of the population had gone up in a linear trend since 2005, with no post-2011 spike.

"I recognise that there's some political cunning in saying that this all came about because of GE 2011. I'm sorry, it didn't," he said.

Rather, the key architect of Singapore's progressive project said that its start point was the landmark Workfare policy - "a major break in our thinking" - which began topping up the wages of low-income earners from 2007.

In his hour-long address, Mr Tharman sketched out how the Government's decisive shift has involved a battle on three fronts: raising real incomes for all, tempering income inequality and keeping social mobility alive.

He brandished statistics that showed progress on all fronts. Real median household incomes - after taxes and government transfers - rose 39 per cent in the last decade here, compared with 17 per cent in Finland and 5 per cent in Hong Kong.

And Singapore has tempered its Gini coefficient, a measure of income inequality, from 0.43 to 0.37 through government redistribution. This was done while maintaining a light burden of tax on the middle-income group, he emphasised: In Singapore, middle-income households get $2 in benefits for every dollar in tax that they pay.

In contrast, the Scandinavian model is one where the Gini coefficient has been tempered more drastically, but with the trade-off of a high burden of taxation not just on the rich, but on the middle-income household, he said.

Mr Tharman reiterated his philosophy of "active government intervention for self-reliance" with a new twist: The Government will not be "hands-off nor give handouts" but build a system of "hand-ups", he said, defined by support especially for those from needy backgrounds, to discover their own strengths.

It has poured resources into early education for children from disadvantaged families. In housing, substantial grants have allowed over 1,800 families whose household incomes are $1,000 or less, to own their own flats.

But for Singapore to continue to succeed, inclusivity in its social fabric must be accompanied by innovation in its spirit, Mr Tharman said.

A highly innovative society, he added, is not one defined by a few ground-breaking creations, but one where every person is constantly striving for greater excellence.

He noted that it is countries such as Japan and Switzerland which top innovation rankings - not the United States, home of Silicon Valley.

"We must do more in our own way to make it possible for every person, every firm, to unleash that innovative spirit in every regard," he added. "It's got to be the way we survive."

Lower-income households: Government transfers (after paying taxes) as a percentage of household income