Members of the group, which is co-chaired by the Singapore Civil Defence Force and the Land Transport Authority (LTA), will pool resources and share information and expertise with one another to minimise fire risks from non UL2272-certified PMDs, said the LTA in a Facebook post on Sunday (Sept 1).

The Housing Board and Enterprise Singapore are also part of the task force.

The Straits Times has contacted the authorities for more information on the task force and the desired outcomes of setting up such a group.

The UL2272 standard is a set of safety requirements covering the electrical drive train system of PMDs, including the battery system.

Devices have to undergo rigorous tests at accredited testing centres before being certified.

The creation of the group comes less than a month after the authorities brought forward the deadline requiring PMDs to be certified safe by six months, from its initial date of Jan 1, 2021 to July 1 next year.

The announcement came after a spate of PMD-related fires in recent months.

In addition, all e-scooters will have to go for mandatory inspections from April 1 next year to ensure that they meet specified standards, including weight and speed. 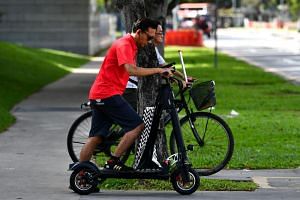 The LTA's post on Sunday said that during the first meeting last week, the task force discussed how it could develop and coordinate public education efforts to raise awareness about the importance of the UL2272 certification, as well as the fire risks arising from improper charging and illegal PMD modifications.

"These include charging your devices in a cool area, not charging them near combustible materials and (not) leaving them plugged in overnight or unattended," said the LTA.

The decision requiring all devices to be UL2272-certified was announced in September last year.

Since July 1 this year, retailers have been banned from selling non-certified devices.

Those found to be selling or leasing non UL2272-certified devices for use on public paths can be fined up to $5,000 and jailed for up to three months for the first offence.

All PMD-related fires involved non-certified devices and could have also been caused by inappropriate charging practices, said Senior Minister of State for Transport Lam Pin Min in Parliament last month.

He also said Singapore has around 90,000 registered e-scooters, and around 90 per cent of them do not comply with the UL2272 standard. 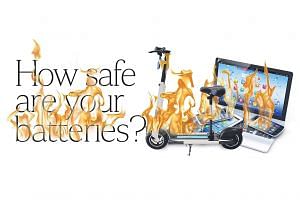 Ban on PMD use at void decks, common corridors at 15 towns to take effect on Sept 1

The number of PMD fires has been on the rise, and there have already been 49 such fires in the first six months of this year.

This could soon overtake the 52 such fires that occurred in the whole of last year.

Last Monday, a fire broke out at a Sembawang flat and preliminary investigations showed that it was caused by a PMD that was being charged.

In another case two months ago, a 40-year-old man died in hospital two days after he was rescued from a fire at his Bukit Batok flat. The fire was linked to three burnt e-scooters found in the flat.

Besides fires, there were also 228 accidents involving PMDs on public paths in 2017 and last year.