SINGAPORE - While planning for longer-term moves like the raising of the retirement and re-employment ages - details of which will be announced later this year - it is equally important to address present-day concerns, said Manpower Minister Josephine Teo on Monday (April 29).

In her May Day message, she said the Government will walk the technology journey with workers, so that they can access good jobs and better wages.

For the longer term, the retirement and re-employment ages will be gradually raised beyond 62 and 67 respectively. Representatives from the Government, employers and unions in the Tripartite Workgroup on Older Workers reached a consensus on this, which Mrs Teo announced last month.

"I am confident it will motivate both workers and employers to invest in skills upgrading and job redesign for older workers," said Mrs Teo, who is also Second Minister for Home Affairs.

Details on the timeline, as well as on the Central Provident Fund contribution rates for workers aged 55 and above, will be given later this year, she said.

Last year, although the labour market performed better, with strong employment growth for local residents, lower unemployment and retrenchments, and higher wages, there were still workers seeking jobs or career advancement, she said.

She assured workers that measures to tighten foreign workforce controls will keep up the pace of restructuring, and nudge employers to improve job quality to meet staffing needs. 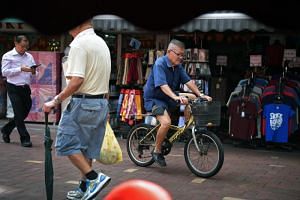 The Manpower Ministry is also helping workers to take up new jobs through the Adapt and Grow initiative, with more than 30,000 benefiting last year, she said. And about 465,000 Singaporeans used life-long learning programmes under SkillsFuture last year.

The recently enhanced Workfare Income Supplement will boost the incomes of some 440,000 lower-wage Singaporean workers by up to 30 per cent. The ministry also introduced Workcare this year to improve workers’ welfare through measures such as promoting the provision of rest areas.

Mrs Teo also noted that this year marks the 50th anniversary of the labour movement's Modernisation Seminar, when it embarked on a more collaborative approach to labour relations with employers and the Government, "helping to realise the vision of a Singapore that is both pro-worker and pro-business".

"As we celebrate the remarkable contributions of our workers, we should also reaffirm the achievements of our unique brand of tripartism," she said, concluding her statement by wishing workers a happy May Day.