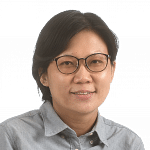 Erland Kops of Denmark, winner of the All-England badminton championships five times in the last six years, was a match point away from winning the match at one set up and 14-9 in the second set.

But his opponent Lee Kin Tat, a university student from Singapore, was not giving up. The Guardian newspaper reported that he "began to play some superb smashes to Kops' forehand, saved three match points and squared at one game all".

The giant-killer outlasted Kops by two sets to one. But the title eluded him when he lost in the semi-final to eventual champion Knud Aage Nielsen of Denmark.

This week in 1965, the Singapore player faced Kops again, as part of a British Commonwealth team which played badminton powerhouse Denmark in London. This time, the Dane won.

"In the 1960s, Malaya was still strong. China had not appeared on the scene," Dr Lee, who holds a physics doctorate from Imperial College, told The Sunday Times.

Malaya and Singapore were badminton powerhouses and the sport peaked in Singapore in the 1930s, wrote pioneer player Tan Chong Tee in his book, Upholding The Legacy - Singapore Badminton.

The British had brought the game to Singapore and it became popular with the mushrooming of courts and wide media coverage.

The Singapore Badminton Association (SBA) was set up in 1934 and with its associated clubs, helped produce outstanding players in Singapore and Malaya, most notably Wong Peng Soon, an All-England champion.

Dr Lee was "Singapore's star in the 1960s", wrote Tan in his book, noting that the player was able to execute a smash from any corner of the court.

The oldest of five children was born in Perak to rubber magnate Lee In Tong. He later moved to Penang, then Singapore, where he studied at St Joseph's Institution.

The schoolboy champion was 19 when he served notice of his talent by upsetting top Singapore players Omar Ibrahim and V.S.S. Nathan. He later moved to London to study at Imperial College and played in Britain and Europe.

Recalling his memorable match against Kops, he said: "The crowd was very excited because the guy was on top of the world and not off form. But I managed to play very well that day. It was no fluke."

He lost in the semi-finals but won 12 titles from the autumn of 1963 to April 1964. "That was my best year. I should have won the All-England but I was too excited. I didn't have enough rest," he said.

Dr Lee retired from competitive badminton in 1973 and later served as president of the SBA and secretary-general of the Asian Badminton Confederation.

A grandfather of three who now runs his own financial business, he said he had no formal coaching but got tips from players like the late Ong Poh Lim, famous for his "crocodile serve".

Said Dr Lee: "It's your training, your determination and perseverance. You have to be a fighter. You don't give up."

A version of this article appeared in the print edition of The Sunday Times on August 16, 2015, with the headline Glory days of local shuttlers. Subscribe