Mr Lee also posted a message to mothers on his Facebook page, saying: "Mothers are the pillars of our families, with one of the toughest jobs of all. Nowadays they raise children, build careers, care for elderly parents, or even become the sole parent in a family. While their roles and responsibilities have evolved, mothers' unconditional love and support remain strong and steadfast.

"Let's celebrate our mothers' contributions as leaders, caregivers, providers, and role models. Take time today, and everyday, to show your mum how much she means to you!"

One of those who received a stalk of pink carnation was Madam Lim Mei Yam, 64. "It's a nice reminder of the importance of women in society and it's also good to feel appreciated as a mother and grandmother," said the housewife, who has three children and eight grandchildren.

A total of 200,000 flowers, sponsored by Neo Group Limited, were distributed island-wide during the event, which was organised by the Ang Mo Kio GRC and Sengkang West Citizens' Consultative Committees together with the Sian Chay Medical Institution.

After giving out the flowers, Mr Lee and the other MPs also attended a ceremony to mark 50 years of national service, where they handed out NS50 recognition packages to 350 national servicemen (NSmen).

The recognition package includes $100 worth of vouchers, a year's free membership in either the Safra or HomeTeamNS network of clubhouses, and a commemorative NS50 Passion Card. 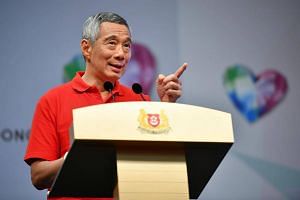 Many families with two generations of NSmen received their NS50 recognition packages together.

Coffeeshop manager Wong Tor Cheo, 60, went on stage with his three sons, who are undergraduates and aged between 23 and 25. "I'm proud that my sons and I all went through this important experience. It's up to the younger generation to defend the country now," said Mr Wong, who was a regimental policeman during his NS days.

Mr Seow Soon Hee, 67, showed up with an official group picture taken when he graduated from basic military training (BMT) in March 1971.

Among the sea of faces in the black and white photograph is a young Mr Lee, who was in the same BMT company as Mr Seow, who was a combat engineer in the army and now runs a steel production company.

Mr Seow got Mr Lee to sign the photograph, and said of his erstwhile fellow recruit: "I remember he was a hardworking, disciplined soldier."