To the naked eye, the latest outdoor exhibit at the Bayfront Plaza area of Gardens by the Bay appears to be nothing more than a black-and-white pillar in the middle of an open space.

But view it through a smartphone camera, on an app made by Japanese art collective teamLab, and it becomes a virtual tree with an augmented-reality canopy of swirling messages.

Visitors can also add their own messages expressing their wishes for Singapore's future through the Message Pillar app, which is available for free on both the Apple App Store and the Google Play Store.

#futuretogether caps a year-long commemoration of the Singapore Bicentennial.

Among the various commemoration activities was the multimedia Bicentennial Experience at Fort Canning which ran from May to December last year. The exhibition attracted more than 760,000 visitors.

At the launch of the new exhibition, Mr Heng said such activities have helped Singaporeans to reflect on their journey "from Singapore to Singaporean".

He added that Singaporeans were reminded of three fundamental values that have underpinned the Singapore story.

"First, openness. Our forefathers came from different lands, staking their hopes and dreams on this island's openness to the world, and the opportunities it created," said Mr Heng.

"Second, multiculturalism. Despite differences of race, language or religion, our forefathers worked together to build thriving communities here, united by a common aspiration to create a better future for subsequent generations."

And Singaporeans held onto the third value, self-determination, even as "the odds were stacked against us", said Mr Heng, who added: "Our people knew that we had to take our fates and our children's futures in our own hands. So we fought for the right to chase our dreams on our own terms, and chart our own destiny." 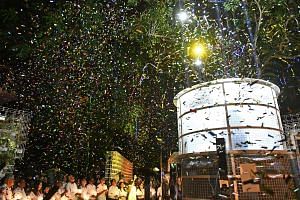 Bicentennial Experience closes, but parts will remain at Fort Canning

Bicentennial Experience: An accessible history lesson that should remain as permanent show

The #futuretogether exhibition is a collaboration between Gardens by the Bay and Singapore sovereign wealth fund GIC.

It consists of seven digital exhibits, including four newly opened indoor exhibits, and will run until March 15.

The Message Pillar is the third and final outdoor exhibit to be unveiled. The other two have been open to the public since Dec 15.

One of them, titled Autonomous Resonating Life On The Water And Resonating Trees, features 334 large inflated egg-shaped lights floating on Dragonfly Lake. The lights change colour when touched by passers-by and each egg emits a musical note depending on its colour.

Another, called Flowers And People - Giant Lattice Mass, A Whole Year Per Hour, is at the lattice structure beside the Floral Fantasy attraction.

At dusk, a blooming sea of flowers is projected onto the lattice, and when visitors stand nearby, more projected flowers begin to bloom around them.

The indoor exhibits, which are similarly interactive, were inspired by animals, flowers, tea, calligraphy and the cycle of life and death.

Entry to the outdoor exhibits is free, while entry to the indoor section of the exhibition is free for Singapore residents - namely, Singaporeans and permanent residents - and costs $10 for non-residents.

Entry to one of the indoor exhibits, called Flowers Bloom In An Infinite Universe Inside A Teacup, costs residents $3, while non-residents will have to pay another $7.

The exhibit is designed to resemble a tea room and visitors are served a cup of tea each. Projected flowers bloom in each teacup and disperse when the cup is moved.

A version of this article appeared in the print edition of The Straits Times on January 16, 2020, with the headline 'Get your wishes for Singapore's future swirling on virtual tree'. Subscribe
Topics:
More
Whatsapp Linkedin FB Messenger Telegram Reddit WeChat Pinterest Print Purchase Article Copy permalink