Some 30 years ago, Mr Ee was roped in by his father, the late Dr Ee Peng Liang, founder of Community Chest, to help with the logistics for a Community Chest TV show.

While he was there managing the logistics, the hours he spent speaking to the people on the show - from children to adults with disabilities - inspired and motivated him, said Mr Ee.

"When you spend time talking to them, you get inspired by their courage, and motivated to say 'maybe I can do something more for them'," said Mr Ee, 69.

He ended up spending more than three decades working in the social service sector and wearing many hats - from being chairman of the now-defunct Toa Payoh Girls' Home, to taking over as chairman of the National Kidney Foundation after the organisation's corruption scandal in 2005.

Some of his accomplishments include establishing the Social Service Training Institute as then president of the National Council of Social Service (NCSS ) Advocacy and Research Panel, and refining the code of governance for charities as chairman of the Charity Council, a post he still holds.

For his contributions, Mr Ee was presented the Outstanding Lifetime Volunteer Award by the Ministry of Social and Family Development (MSF) yesterday, at the Raffles City Convention Centre. It is the highest accolade of the MSF Volunteer Awards that pay tribute to passionate and dedicated volunteers of the ministry. He was among 163 volunteers honoured at the annual ceremony, started in 1995.

Mr Ee said the outcomes of his team's efforts have kept him going all these years. For example, he has witnessed how former Toa Payoh Girls' Home residents found jobs in the cosmetics sector, after attending the hairdressing and make-up courses that he introduced to the home. 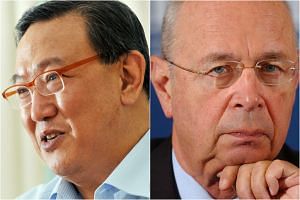 Another long-time volunteer is Sister Bernadette Yap, 77, who has volunteered with the NCSS for the past 36 years.

The Outstanding Volunteer Award recipient was especially motivated to continue her volunteer work after she recovered from a potentially deadly chest and lung infection in 2015. "I could not have thanked God enough for giving me back my life. How can I not volunteer and give my life back to society," said Sister Bernadette.