SINGAPORE - A generous couple, the late Mr Gerry Essery and Mrs Jo Essery, has left behind a $6 million legacy that will be divided equally among the Assisi Hospice, National Kidney Foundation (NKF) and the Society for the Prevention of Cruelty to Animals (SPCA).

Mrs Essery was born in Singapore and lived here before leaving for South Africa at the start of World War II.

Mr Essery, on the other hand, was born in Britain and came to Singapore in 1931, as his father was working as an engineer here. His father sent him to Australia when the Japanese invaded Singapore in 1942. A few months later, he travelled to South Africa where he was reunited with his family - and met his future wife. They got married in South Africa in 1945.

The couple then moved to Australia in the 1950s, where Mr Essery worked for multinational confectionery company Cadbury. He then got a job in a glass production company in Singapore and the couple decided to make Singapore their home. The Britons became Singaporeans in the 1970s.

A close friend of the late couple for more than 30 years, Dr Tan Hwa Luck, a semi-retired veterinarian, said: "They earned their fortune from the society, so they believed that they should give back to the society, especially to those who are in need, to make the future of the world a better one."

Said Dr Tan, who is also the executor of the couple's estate: "They were a loving couple, married very young. They started with very little but they worked hard and learnt how to live a simple life, which continued as a way of life for them till their old age. They were generous and very involved in helping others. Hence, I am not surprised that they donated their money to good causes."

A third of this legacy will go to NKF to build a new dialysis centre in Marsiling. 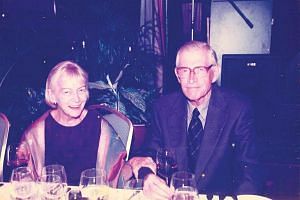 With one new case of kidney failure every five hours, NKF chairman Koh Poh Tiong said that the legacy gift was a timely and much-needed one.

"We are touched and grateful to Jo and Gerry for their generosity, love and benevolence. Their $2 million heartfelt legacy will go a long way in our mission of ensuring that no needy kidney patient will die because of no access to dialysis," Mr Koh said.

Construction of the centre will start in October and it is expected to start operating in April 2018. It will have 22 dialysis stations which will benefit 132 kidney patients who live or work in the north-west.

Madam Halimah Yacob, an MP for Marsiling-Yew Tee GRC, said: “We are most thankful to Jo and Gerry for their long-lasting and meaningful gift that will be a sanctuary for many poor and needy kidney patients for many generations to come.”

Mrs Essery, affectionately called Mrs "E" by SPCA staff, was on the SPCA's management committee for more than four years in the 1970s.

Of the $2 million the couple has donated to the SPCA, $300,000 has been used for its new building fund as well as for an open-air education pavilion, which has been named the Essery Education Pavilion. The remainder will be used to upgrade and maintain the SPCA Animal Welfare Centre in Sungei Tengah. The $2 million sum is the largest outright donation SPCA has received, said its executive director Jaipal Singh Gill.

The remaining $2 million has been donated to Assisi Hospice, which provides palliative care for the terminally ill in home-care, in-patient or day-care settings.

Assisi Hospice's chief executive Choo Shiu Ling said: "The majority of our patients are from low-income families, with issues not just relating to their health and finances, but also social challenges that may compromise the well-being of their family members. We are deeply grateful for Jo and Gerry Essery's generous donation of $2 million for us to help needy patients."

Essery Hall at Assisi Hospice has been named in honour of the late couple, and is used for staff clinical training, talks and seminars.