To mark Singapore's 53rd birthday, The Straits Times came up with a game for readers: Find 53 items hidden in an illustration of a crowd watching the National Day Parade (NDP). Readers have to find 10 of each item, and three 'bonus' fireworks icons. More than 48,000 people have played the online game since its launch on July 29 and more than 8,000 users have successfully completed the challenge. Here are the items to look for.

Did you know that the half-fish, half-lion creature was conceptualised as Singapore's tourism logo?

The Singapore Armed Forces' parachute team has performed at almost every NDP since 1989.

Yet it was only four years ago that the first female parachutist - Third Warrant Officer Shirley Ng - made her debut. 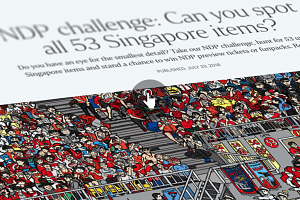 First the emblem of the now-defunct Singapore Progressive Party in 1947, the orchid breed was made a national symbol only in 1981.

But for a long time, there was no consensus on whether the late Agnes Joaquim - a wealthy woman of Armenian descent - had bred it or had simply found it in the garden of her Tanjong Pagar mansion.

It was only in 2016 that the authorities amended official records to credit Joaquim as the flower's breeder.

Did you know that the national flag almost did not get its white half?

In 1959, the committee led by then Deputy Prime Minister Toh Chin Chye presented a flag with a completely red background. But the newly formed Cabinet led by the People's Action Party thought that having just red would not be suitable, as the colour was synonymous with communism at the time.

Singapore throws its 53rd birthday bash this year with a big parade at The Float @ Marina Bay.

But it was a much simpler affair in 1966, at the first NDP after Singapore's independence. Soldiers, uniformed groups, and lion and dragon dancers kicked off the parade with a march past at the City Hall at 9am.

For the first time, this year's NDP will feature daylight fireworks during the pre-parade segment.

Spectators will also see a formation of five stars shooting into the sky as the National Anthem is played.

How the game was created

The game took a team of five developers and designers one week to put together.

First, Straits Times digital infographic journalist Billy Ker, 29, spent more than 50 hours drawing the illustration by hand. It was a tricky job trying to make the items difficult to find while painstakingly populating the scene with interesting details.

But Mr Ker had fun with the project, stashing more than 40 "Easter eggs" in the illustration, which has more than 700 characters.

These include distinctly local icons such as Singa the Lion, Sharity Elephant and Phua Chu Kang, as well as international figures including United States President Donald Trump.

When the illustration was done, Web designer Lim Ling Li, 45, filled in the colours for the backdrop.

She also had to cut out the 53 items individually using Adobe Photoshop, adding halo effects that make the items light up when clicked on.

Each of the 53 items then had to be positioned manually on top of its corresponding location in the background image.

This allowed them to provide the pan-and-zoom effects crucial for gameplay.