SINGAPORE - The setting up of the two casinos here in 2010 did not lead to more Singaporeans getting hooked on gambling, as many had feared before they opened at Marina Bay Sands and Resorts World Sentosa.

The pathological and problem gambling rate among Singaporeans and permanent residents was 0.9 per cent in the 2017 survey by the National Council on Problem Gambling. It inched up from 0.7 per cent in the 2014 survey, but the change is not statistically significant, the council's spokesman said.

The survey is done every three years to find out the extent and pattern of gambling here. The latest study was released on Mondaymorning (March 26).

In fact, the gambling addiction rates have been falling since the first survey was done in 2005 - way before the casinos opened, checks by The Straits Times have found.

Professor David Chan, a member of the council, said that the proportion of gamblers here who do so at the casinos is small. "So we can conclude that with or without the casinos, it does not affect (the prevalence rate of pathological and problem gambling)."

The latest study found that only 1 per cent of those polled played the jackpots or the table games at the Singapore casinos. 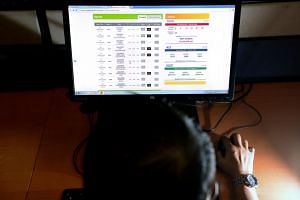 A Ministry of Social and Family Development (MSF) spokesman pointed out that the Government has put in place a slew of social safeguards to prevent Singaporeans from getting hooked, such as the $100 daily entry levy.

The spokesman also said fewer Singaporeans are going to the casinos as the novelty has worn off, without giving more details.

While the 0.9 per cent prevalence rate is small, it still translates into a sizeable number of people who could be hardcore gamblers, given that the study is nationally representative of the population, Prof Chan said.

In the 2017Population Statistics report, there were about 3.1 million Singaporeans and permanent residents aged 20 and older. So 0.9 per cent of that works out to about 28,000 gambling addicts here.

Addicts gamble beyond their means and this often leads to strained ties and financial woes for their entire families.

A 51-year-old cabby, who only wants to be known as Roger, is one example. The father of two owes loan sharks and moneylenders $13,000 after losing all his money on 4-D and Toto. He can bet up to $5,000 a month on these two games. He has stopped gambling after his distressed family took him to seek help.

Those who counsel hardcore gamblers, such as Mr Billy Lee of Blessed Grace Social Services, expressed surprise at the falling prevalence rate over the years, given that they are seeing more addicts seek help in the past few years. They pointed out that many addicts may not be truthful when answering survey questions, hence that could affect the findings .

Others noted that the council has done a lot to raise awareness of problem gambling and extend aid to those affected, which could have brought the addiction rates down.

Meanwhile, the council has upped the number of centres offering help to problem gamblers from two to six and has also started a new e-counselling service in July last year, where people can get counselled anonymously over the phone or the Internet.

If you need help, call: