Those who follow Singapore's tourism industry would have noted that among the 17.4 million visitors the island received last year, some 1.4 million were supplied by the cruise industry, which continues to break records on the back of double-digit growth, leaving the Singapore Tourism Board (STB) "pleasantly surprised", as its chief executive put it.

Credit that to people like Mr Daniel Chui, managing director of Oceanic Group, whose sweat and toil have helped to build Singapore into one of Asia's most promising cruise destinations.

Back in 1990 when the industry was in its nascent stages, Mr Chui, now 51, was one of the senior staff in the company that ran the ship Andaman Princess, an ageing vessel that had seen better days.

A five-day cruise during the year-end holidays from Singapore to Phuket turned out to be a nightmare for not only the staff but also the full house of 500 passengers on board.

"The hot-water taps were running cold water. The cold-water taps were dry, the entertainment was lacklustre and the announcements were in Thai... Everything that could go wrong, went wrong," recalls Mr Chui.

When the vessel returned to Singapore, only a hundred passengers disembarked.

The other 400 staged a sit-in, demanding refunds. Unsure how to deal with the situation, the ship's owners quietly left, leaving the untested Mr Chui to handle things.

His reaction, says Mr Chui, was to go out and face the music.

The irate crowd was pacified with the promise of a free onboard lunch and a 50 per cent discount on their next cruise if they chose to return.

The passengers, aware that Mr Chui was the fall guy, left the boat.

"The experience taught me to be resilient," says Mr Chui, a former St Andrew's boy all the way to junior college. "At the end of the day, people simply wanted an opportunity to be heard. They were aware that I could have quietly left the ship as well."

It would bring its own rewards.

When the joint venture that ran the Andaman Princess soured, his bosses set up another company, Andaman Cruises, and offered him a 30 per cent stake for a dollar if he would stay on.

He took up the offer, recounting a time when he went without sleep for a fortnight as the company dealt with four back-to-back charters for firms, including Hitachi and Parkson. The turnaround time for each sailing was barely eight hours and, with a full passenger load on board, he had to share sleeping quarters with three others.

"The photographer I shared my cabin with was recovering from chicken pox and I caught the disease," says Mr Chui. "I was knocked out for 10 days."

These days, Mr Chui is the "humble owner" of Oceanic Group, a Singapore-based chartering and ship management company that operates four vessels, including the iconic QE2, currently undergoing a refit in Dubai. A fifth, the Cartoon Network Wave, is to launch towards the year end, themed on Cartoon Network characters.

The themed cruises underscore how the booming industry is evolving with the times.

Asian cruising tends to be a multi-generational affair, with whole families coming on board and with children often having the final say in choice of travel and destination - "pester power", as it is known in marketing circles.

For millennials, experience - instantly uploaded to social media sites such as Instagram - is key.

He says he pursued Cartoon Network because surveys show its products have some of the highest familiarity ratings in Asia.

Only a quarter-century old, Cartoon Network continues to refresh and rejuvenate its offerings, owning intellectual property on characters and associated merchandise.

"We were looking for depth, width, consistency and an ability to compete and sustain amid the competition," he says, adding that he is constantly reminded of the words of former STB chief Tan Chin Nam that "fun is a serious business".

Cruise Lines International Association, an industry body, says the number of ships deployed to Asian waters has risen 53 per cent since 2013, and cruises and voyages are rising at a compounded annual growth rate of 25 per cent.

Cruise calls last year were projected to exceed 7,100, an increase of 29 per cent in absolute volume from the previous year's 5,574 calls. While Japan, China and Thailand are the fastest-growing markets, Hong Kong, Taiwan and the Philippines are seeing brisk business as well.

So, too, the Indian market. 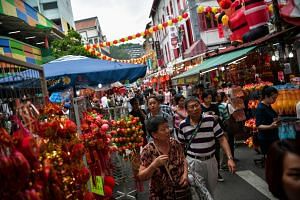 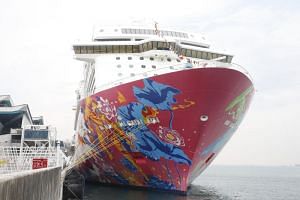 Last year, there were 35 active cruise brands in Asia, enjoying a year-round supply of customers.

June is when Singaporeans and Malaysians tend to cruise, says Mr Chui. From July to October, the market tilts towards North Asians.

July and the year-end months are also strong for the India market, much of it free-spending honeymooners on their first overseas trip.

"For the cruise industry, these are the best of times," says Mr Chui, musing on how much things have changed since his early days in the business. Cruise ships then tended to be in the 5,000 gross registered tonnage (GRT) range and carried about 500 people. Soon, capacity doubled, then quadrupled.

These days, some ships carry 8,000 people and displace 250,000 GRT. Royal Caribbean alone has four of those vessels. And ship designs are now moving to 400,000 GRT and 10,000 passengers, with four captains and four hotel managers on board, aside from 4,000 crew members.

"As the ships become bigger, (each) becomes like a city by itself," says Mr Chui. "It is really a city at sea, like VivoCity with a million square feet, where you can do so much from morning to night.

"Size does matter in this industry."

The threshold for cruising is rising too. From one day when ships were small to three days as they grew larger, Asians, with plenty to do on board, can now appreciate a five-day cruise.

They are even willing to consider a week-long passage.

Cartoon Network Wave, which will have a gross tonnage of 50,000 GRT with 14 decks and a family entertainment centre on the seventh deck, will come packed with technologies such as virtual reality, augmented reality and mixed reality.

He expects the Singapore-based ship to be consuming much of his time in the coming years, and he has plans to develop a fleet of Cartoon Network-themed vessels positioned in Singapore, Northern Asia, Australia and possibly in India for the Middle East market - areas for which he has exclusive rights to the brand from Cartoon Network's parent, Turner Broadcasting System, a Time Warner subsidiary.

Mr Chui seems less certain about when QE2 would appear in our waters, saying a lot depends on DP World, which owns the iconic ship.

Recent reports in the Middle East media suggest that there has been stepped-up activity around the 50-year-old vessel. "We do have plans to bring her down to Singapore, Hong Kong and Tokyo for three years at a time," he says. "But it is anyone's guess. Perhaps we could bring her over in 2020."

Although most of his money is made overseas, Mr Chui heaps praise on STB for its planning and promotion efforts. The island has two cruise centres, is ready for the largest vessels ahead of time and the massive capacity addition to Changi Airport that is in the works will further feed the cruise business.

"They rejuvenate the brand every five years. The latest is Singapore: Passion Made Possible. Some years ago, if you had mentioned 10 million tourists, I would say 'too many zeros', but today you have 17 million. We are all beneficiaries of the Singapore system," he says.

One episode he would rather forget is the stress last year, when some Europeans he had earlier done business with persuaded him to part with $1.5 million for a dud deal.

He went to Paris to negotiate a ship sale and allegedly discovered the cash deposit he had been given was in counterfeit notes, while the people who had "arranged" the transaction had already been given their commission. His dilemma was to call in the police and risk public embarrassment, or to stay quiet and absorb the loss and its lessons.

The Singapore police have charged several people for the offence and the matter is before the courts. "Getting married was an easier decision," he chuckles. "What made me ask my staff to file a police complaint was that I had worked very hard for my money."

For a while afterwards, he had to endure ribbing from friends who would not let him pay for drinks or coffee, citing his straitened circumstances.

Oceanic was registered in January 2010, following some months of gardening leave after Mr Chui ended his association with cruise giant V Ships, whose operations he ran in the Asia-Pacific.

While he got to appreciate Singapore's greenery in that period and could spend more time with his son Dominic, he had begun to get in his wife's way by being at home too much, he says.

Now in his 50s, with a home in Sentosa and a Porsche in the garage, he feels his journey is just starting. "When I retire, I want to write a book on cruising. It was hard work, but I enjoyed every moment of it."