SINGAPORE - The stunning Fullerton building seated at the mouth of the Singapore River is now the country's 71st national monument.

The 1928 structure was gazetted on Monday (Dec 7) in a ceremony officiated by Prime Minister Lee Hsien Loong.

PM Lee said the building holds special meaning to Singaporeans, who remember it fondly as the General Post Office, and as an important point of reference for public roads such as Mile Zero.

He added that he has personal memories of the place, as it was at Fullerton Square that political parties held lunchtime rallies during General Elections.

"Mr Lee Kuan Yew would speak at the PAP rally, always a major event in the campaign, and delivered many stirring and memorable speeches usually in the sun or in the pouring rain. My mother would listen to him from the balcony of the Fullerton Building.

"When I first entered politics in 1984, I too spoke at the Fullerton Square rally," said PM Lee. 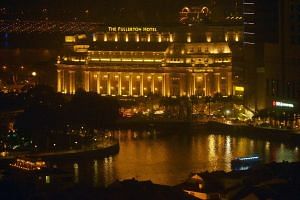 7 things about the Fullerton Building, now a Singapore national monument

The national monument gazette is the highest form of recognition for a structure or site's significance. Evaluation factors include its historical, architectural and social importance to the country's built heritage.

Ms Jean Wee, the director of the National Heritage Board's Preservation of Sites and Monuments' (PSM) division, described the waterfront landmark as "one of the most iconic buildings" which has defined Singapore's skyline since the 1920s.

The grand neoclassical building with its colossal Doric columns, now The Fullerton Hotel with 400 rooms, had been commissioned by the colonial government to cope with increasing volumes of mail as the trade industry grew.

Named after Sir Robert Fullerton - the first Governor of the Straits Settlements - the post office there had been well-utilised by merchants who sent out telegrams, money orders and parcels. The National Heritage Board said the thriving post office reflected Singapore's role as the prime postal unit in British Malaya in the 20th century.

Mr M. Bala Subramanion, 98, the postmaster general who worked at the General Post Office between 1936 and 1971, said it functioned as a "hub of communication".

"All the mail posted to Singapore went through our sorting office," he said.

Multiple historic events and milestones in Singapore's history have since taken place within its walls.

It was where the British military made the decision to surrender to the Japanese; where the Japanese military administration department operated during World War II; and where Singapore Government departments such as the Ministry of Finance used to be housed. 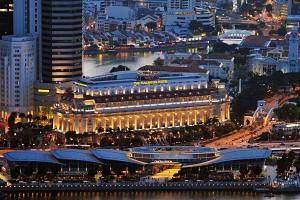 From The Straits Times Archives: Other national monuments in Singapore

Retired captain PJ Thomas, 74, who had a first floor office adjacent to the Singapore River in the 1960s and 1970s, said that strong relationships were built across Government departments. "There were so many Government offices there. I became friends with many of the officers, playing chess and table tennis with them during breaks," he said.

Captain Thomas, who had been part of the Marine Department, added that the Singapore River was always busy. "Lighters, motorboats and sampans ferried to shore cargo such as cement, cotton and rubber bales, and sacks of rice from the big ships out in the harbour," he said.

The building also once had a lighthouse which guided ships into the Singapore Harbour. It was replaced in 1978 by the Bedok Lighthouse when its effectiveness diminished as skyscrapers rose around it.

The Fullerton's gazette is the third in a series by the PSM in celebration of Singapore's golden jubilee.

The others were Jurong Town Hall in June and the Istana Kampong Glam in August, which represent the nation's industrialisation drive and the country's historical links with the Malay world respectively.

PSM's Ms Wee said: "As we celebrate Singapore's Golden Jubilee, we reflect on the trail history has left on our landscape, and in turn accord those that are nationally significant the highest form of preservation and recognition."

The building was first conserved in 1996 by the Urban Redevelopment Authority before it was transformed into a hotel by Sino Land - the Hong Kong arm of Far east Organisation.

The Fullerton Hotel will be running an exhibition on the building's history from now (Dec 7) till the end of February.