The price of wedding banquet tables has reached a new high of near $2,000, The Straits Times reported on Sunday (March 13).

The Julius Baer Lifestyle Index, which compares the price of luxury items and services across Asia, put Singapore as the region's sixth priciest place to tie the knot last year.

But a wedding doesn't have to always follow the same template; some have organised weddings for as little as $900, while others have splurged on making their day memorable.

From The Straits Times' archive, here are stories couples have shared of their big day:

I DO, MY WAY: MAKING YOUR WEDDING SPECIAL

Ms Debbie Soon and her husband had theirs in a tent on the Marina Barrage, while Ms Uma Ramakrishnan and Mr Jacob Jonathan had an vintage-themed gathering at bakery-cafe Carpenter & Cook.

Mr Larry Ho and Ms Chia Sin Nee spent less than $900 by having the ceremony in their own flat. Ms Karen Wai and Mr Jean Paolo Ty also tried to save by having an outdoor wedding, and buying all their decorations from Daiso.

How much should you put in your red packet when attending wedding banquets?

IT manager Gideon Tan did not mind splashing out $1,400 to charter two buses to ferry his family and friends across the Causeway for his wedding last month.

The 37-year-old and his wife, teacher Rebecca Goh, 34, estimate that they saved at least $20,000 by holding their banquet at the Pekin Restoran Johor Jaya restaurant in Johor Baru instead of a hotel in Singapore.

"It made more sense for us to do this as my wife is Malaysian and most of her relatives live in Johor Baru and Ipoh. The smaller bill was also a consideration," he says. 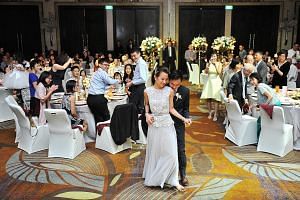 Their wedding in May last year spanned three days and cost $600,000. But Ms Natalya Twohill, 28, an associate in a private investment firm, and her husband, business development manager Sanjey Chandran, 33, think it was money well spent.

The festivities kicked off on May 23 with a henna party at Mr Chandran's home and included a tea ceremony and a Hindu temple ceremony.

The celebrations culminated in a grand 90-table banquet at the Shangri-La Hotel, Singapore that cost $500,000.

Many people will cringe and cower but Ms Jenny Tay and her fiance Darren Cheng opted for a casket as a prop in a series of pictures taken for their wedding in October last year.

Their reason? They are dead serious about their profession and their wedding. Both are in the funeral trade.

Ms Tay is the daughter of Mr Roland Tay, a colourful undertaker well-known for arranging free funerals for murder victims, the poor and the destitute.

HAPPINESS IS A SIMPLE DIY WEDDING

You've already said "yes" to the most important person, don't be afraid to say "no" to others, says Straits Times journalist Hoe Pei Shan.

She writes: "I announced I wasn't going to have any guests other than our parents as witnesses at the wedding ceremony - the part where we exchange vows and sign papers that would legally give me access to his property.

"Oh, I added, there wouldn't be a big dinner banquet either, just a small lunch I would be planning in a non-air-conditioned section of a restaurant and bar, which I would be decorating myself too."