Former chief justice Yong Pung How, who implemented rigorous reforms to transform the Singapore court system into a model of efficiency, died on Thursday (Jan 9) morning. This story was first published in The Straits Times on April 11, 2006.

It was a lesson in law, physics and of higher entity.

The hearing was before Chief Justice Yong Pung How.

The lawyer, acting for a motorist in an accident, said that scientific evidence showed that a driver usually has a fraction of a second to avoid an imminent collision.

So the other motorist who collided into his client's car should have been able to avert the crash.

CJ Yong who had been listening intently, interrupted to say: "Counsel, you don't need the court. You need God because only God will know how fast is a fraction of a second."

It was an example of the kind of sharp yet witty remark that people have come to associate with CJ Yong, who was known to save his most acerbic observations for lawyers who used complex legal arguments.

His preference for clear and easy-to-understand legal arguments was probably one of the reasons why he spearheaded the improvement of the Singapore legal system.

After spending more than 15 years of ensuring that the Wheels of Justice are well-oiled, CJ Yong retires tomorrow, just one day before he turns 80.

But he should take comfort that he is handing over a world-class judiciary to his successor, Mr Chan Sek Keong, 69, who is the Attorney-General now.

From the day he became CJ in 1991, "public access" were the two words foremost in his mind. 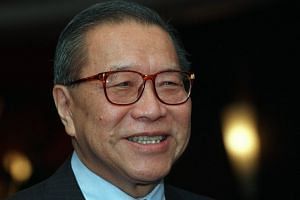 Faced with a backlog of 2,000 suits then, he had to do something drastic or risk delaying these cases by five or six more years.

So a revolutionary case management system was put into place to not only track the progress of each case, but also to ensure that no judge would go home without doing a fair share of work.

Leading by example, he took on the lion's share of the work by appointing himself as the sole judge who would hear all criminal appeals from the Subordinate Courts.

That meant he had to hear up to 20 cases weekly, which explained why the lights in his office would often still be on after 7pm.

His system worked so well that the backlog vanished soon afterwards.

Former High Court registrar Chiam Boon Keng once commented that his biggest challenge in the later years was to ensure that all judges had ample work!

Today, hearing dates are available within three months of parties being ready, and more than half of writs filed are concluded within six months.

It's no coincidence that our court system is studied by other countries because only in Singapore will you find lawyers having to work harder to keep pace with the judges.

The swift changes caused unhappiness among some lawyers but CJ Yong never backed down from his stringent policies.

After all, justice delayed is justice denied, and the public and even foreigners have nothing but praise for the courts' efficiency.

Similarly, when CJ Yong moved in to check the high legal costs of lawyers, the public cheered.

You knew that the man had a feel of the public pulse in the way he reacted to current affairs.

Once, he acquitted a group of men who were charged with gambling and declared that it was not a crime when a few friends gather for a game of mahjong as a form of entertainment.

Many people cheered this down-to-earth ruling. 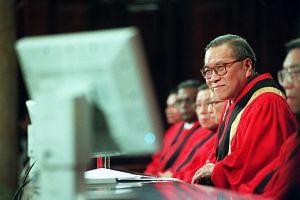 From ST Archives: If fate had taken a different twist, CJ Yong Pung How might have been a doctor

Whenever newspapers reported a new crime trend, the public could almost always expect CJ Yong to do something to keep it in check.

During his 15 years on the Bench, he handed down landmark rulings to stamp out and deter serious crimes such as road rage, molestation, rioting and drug consumption.

As he put away many of these criminals, the CJ soon earned a reputation for "regularly" enhancing the sentence of those who appeared before him. But what cynics were unaware of, in most cases, were the backgrounds of these criminals.

Take Wong Wing Hung for example. In 1999, CJ Yong sentenced him to the maximum of 20 years' preventive detention for what appeared to be relatively minor case of causing hurt to a police officer.

The reason - Wong was an incorrigible criminal who had more than 10 previous convictions for violent crimes such as rape and robbery.

But despite CJ Yong's often stern appearance in court, some of his best judgments were actually based on compassion, and not the unfeeling letter of the law.

In a heart-rending custody battle in 1997, CJ Yong had to decide between two equally loving parents of a boy.

In the end, he ruled in favour of the mother because he described maternal love as "one of the most unexplainable wonders of human nature".

He said then: "We have all heard of the story of the mother who fought a tiger with her bare hands to save her child from the ferocious beast. Such is the love and sacrifice of the maternal instinct.

"This court would be doing a disservice to justice and humanity if it turned a blind eye to the most fundamental bond of mankind - between a mother and her child - by taking the child away from the mother."

CJ Yong also showed similar compassion to another mother a year later even though she was caught shoplifting for the seventh time.

He saved his sharpest rebuke not for the woman but for her two "respectable" grown-up sons, for failing to take care of their mother who stole again because of depression.

Normally, a repeat shoplifter could face a minimum seven-year detention. But CJ Yong broke convention and spared her the long jail term, allowing her to serve out her remaining 15-month term.

He also asked the deputy public prosecutor to ensure that the woman would receive treatment for her depression in prison.

When CJ Yong steps down tomorrow, he leaves behind more than 1,000 written decisions in his name, making him possibly the most prolific judge in the world.

So, even as he enjoys his retirement, his name will continue to make its mark in court as lawyers cite his landmark decisions for years to come.

I also honked at a driver about two weeks ago. It would be terrible if someone had come out and walloped me for that. All sorts of people also point their fingers at me but I don't go and wallop them.

- CJ Yong in an earlier judgment

A lot of people get nuisance calls, including judges. After their daughters get sentenced to jail, people sometimes call the judges at 3am.

They blast your great-grandmother and defile your relatives.

CJ Yong: He has a previous record for theft. So your client has moved up the social ladder to become an illegal moneylender now.

Lawyer: But he has turned over a new leaf and given up his loan-sharking business.

CJ Yong: Of course he has. He would not have any money to lend out after paying his fines.