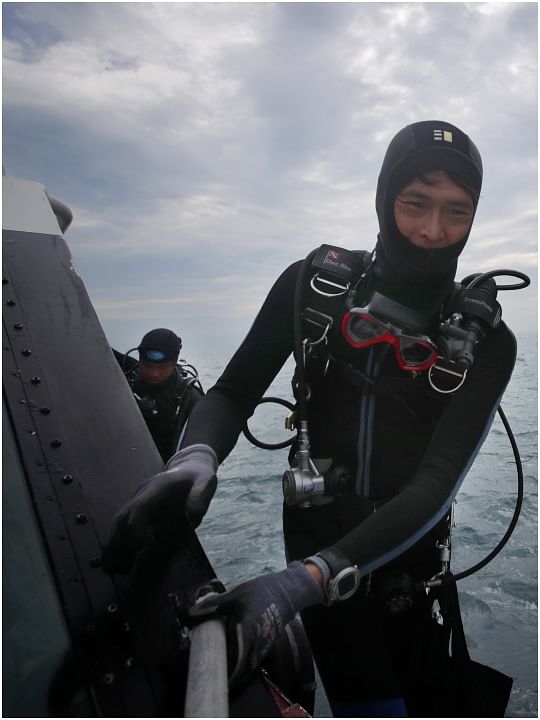 SINGAPORE - At an hour when most people are snugly in bed, five divers are already on board a vessel - and on their way to a spot a good 24 nautical miles away from mainland Singapore.

Some bleary eyes are not unexpected in the pre-dawn hour, but a sense of mission pervades on May 22, as they are on their way to a "treasure hunt" - a maritime excavation, to be precise.

Heading out to sea for excavation mission

They want to get to the site, near Pedra Branca, as soon as they can so that diving time in the day is maximised, when the light is good.

The site is where a historical shipwreck had been discovered in 2019 - the second one that was found in the area after the first was detected in 2016 - and the five are going back there to continue their work in Singapore's first major maritime excavation exercise.

Two boatmen are taking them on the long journey, so the divers have time to brace themselves for a good day's work - sipping a warm beverage, enjoying the morning breeze out at sea.

Maritime archaeologist Michael Flecker, the excavation's project director, said that even with the early departure and late return, the team has only a few hours at the shipwreck site.

There is also a limited window for excavation work to be done in a year as work is unsafe during some monsoon periods.

Even when it is safe to proceed, divers may still face strong currents and low visibility in the waters off Pedra Branca. Planning is thus critical, and the team uses the voyage to go over the details.

"Out there, the currents can be two-and-a-half knots. Divers can work quite well in one to one-and-a-half knots, but as soon as you get over that, it becomes very difficult... maintaining your position and not having your equipment swept away," said Dr Flecker, who has more than three decades of maritime archaeology experience.

"Some days, it's like being in a swimming pool - it's beautiful, we can see many metres while in the waters. On other days, we have to crawl our way back along our baseline to try to find our mooring line so we can go back up to the vessel. It's just completely pitch black," the 58-year-old added, referring to a rope attached to a weight on the seabed. The rope acts as a guide for divers trying to return to the vessel.

It is these black bags that divers will fill up with centuries-old ceramics and other precious finds while on the seabed. They do their best to fill the bags up before returning to the surface, one method of bringing their haul up.

On the seabed, a grid is set up, to allow divers to know which areas they have covered, and which area needs to be worked on. Artefacts that are retrieved are also subsequently systematically labelled and packed according to their grid numbers.

The wreck site appears to hold a seemingly endless supply of ceramic shards.

But as research officer Michael Ng, 34, found out in 2017, there are also more substantial treasures to be found.

And what a precious find one of them was. The piece, a 14th century blue-and-white bottle with a flanged straight neck, bulbous body and flared foot, is believed to be the only documented example in the world.

"When I found it, it was quite encrusted, but there were specks of white and blue peering out from the bottle," Mr Ng said.

He added: "But to be honest when I first looked at it, only the bottom was facing me, and I thought it was just a small stoneware jar.

"Slowly and surely, I realised this thing extends all the way in, and when I pulled the bottle out, it was quite an amazing feeling."

Once the divers return to the surface, their cargo gets on board before they do.

Larger and heavier artefacts are lifted out of the sea in crates, using a winch. After passing over the bags of artefacts to colleagues on board, the divers ascend a ladder onto the deck.

Constant ticking of a mechanical winch

The heaviest of the artefacts - four anchors and nine cannon which were found at the site of the second shipwreck - are lifted out of the waters using a crane.

An initial process of sorting takes place on the deck, where ceramic shards and other artefacts are removed from the black bags, and placed into red mesh bags. These bags are labelled with information like the grid data.

Important pieces are bubble-wrapped, while the red mesh bags are placed in crates to be transported back to the mainland. It is in these mesh bags that the artefacts will go through a conservation and stabilisation process at a facility on the mainland.

Unique pieces are set aside, and their specific position within the grid is measured and noted.

After multiple dives, and with the cargo packed, it's time for the team to return home. It has been a productive day, with many artefacts out of the sea for the first time after several centuries.

The crew also takes the opportunity to eat and recharge.

A glorious sunset welcomes the crew and their haul back to shore, signalling the end of another excavation day.

Back on shore and at the artefact processing facility, a long journey of conservation, documentation and research begins. The artefacts, freshly out of the sea, are soon returned to the water.

Salts need to be removed from ceramics, and from glass and stone, which are "completely inundated with chloride ions" from the salt water, said Dr Flecker. This is done through regularly changing the water they are placed in, he added.

Meanwhile, metals are put in a chemical solution, with further conservation work to follow, while organic materials like wood are reinforced if required.

Cleaned, conserved and catalogued, a new future awaits the centuries-old artefacts, which, over the course of the excavation process, have regained their lustre.

And if all goes as planned, some of them could be on display at a museum as early as the end of the year, according to the National Heritage Board.

Shipwreck finds a boost to maritime archaeology and heritage in Singapore