SINGAPORE - Many people may feel that joining the Singapore Navy is a huge leap from studying dance at the School of the Arts (Sota).

But not for Midshipman (MID) Allison Tan Sue Min, a Singapore Armed Forces (SAF) scholar who received the President's Scholarship alongside three others at the Istana on Thursday (Aug 15).

The 19-year-old said that as a young dancer in primary school, she watched a group of dancers huddle nervously backstage before a performance and she was touched by the sense of belonging and closeness.

"I found that same spirit in the Navy," she explained.

She enlisted in January this year, going through Basic Military Training before joining the Navy in mid-March.

Her interest in the SAF was piqued after seeing it in a scholarship guide, despite growing up without much exposure to the SAF as she has only one younger sister. She signed up for several engagement events by the SAF, including the Mindef Experience Programme (MEP) last June.

A speech by one of the commanders during the MEP left a deep impression on her.

"The thing about these experience programmes is that they tend to want to show you the best and most glamorous parts of life in uniform," said MID Tan.

"But he came up and said, 'I'm not going to convince you to sign on, in fact I'm going to tell you all the reasons you should not sign on'," she added.

At the end of the speech, the commander told the attendees that if they can look past these reasons and still find the drive to serve this cause, then the SAF is for them, she said.

MID Tan will be studying international relations in a four-year integrated Masters programme at the University of St Andrews in Scotland. 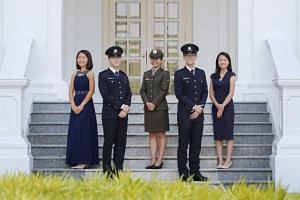 Number of female recipients for Mindef, SAF scholarships doubled from a decade ago

The other President's Scholarship recipients include Mr John Chua Je En from Anglo-Chinese School (Independent) and Mr Muhammad Dhafer Muhammad Faishal from Raffles Institution. They will both be pursuing liberal arts in the United States. Mr Chua will be heading for Harvard University while Mr Dhafer will attend Stanford University.

The fourth recipient is Mr Siow Mein Yeak, Yue who was from Victoria Junior College. He will be studying mechanical engineering at Imperial College London.

Both Mr Chua and Mr Dhafer said their fathers played a role in their decision to join the public service.

"He would go out on night walks at 2am to find rough sleepers," said Mr Chua. "It really opened my eyes that on any given night, there are as many as 100 vulnerable individuals out on the streets or couch-surfing.

"There are so many people with urgent needs in the community and I cannot live for myself," he added.

For Mr Dhafer, he learnt the importance of ground engagement in policy-making after seeing the work done by his father, Senior Parliamentary Secretary for Education and Social and Family Development Muhammad Faishal Ibrahim, and grassroot leaders.

"I learnt from my dad that even though the work is tough, especially in terms of policy-making, that not everyone may agree with you and the policies you are creating, it's really about the purpose you're going in with and the kind of impact on people," he said.

Mr Siow's time with the current affairs club in VJC led him to the public service, as he wanted to be part of "a cause greater than myself".

He believes engineering will train his mind and enhance his sense of empathy which will help him when he joins the public service.

All three men, aged 19, will serve in the public service after graduation, while MID Tan will return to the SAF.

In her speech at the ceremony, President Halimah Yacob said: "We all know that no matter how brilliant we are, without the right support and opportunities provided for us to develop to our fullest potential, our growth will be limited.

"Our forefathers helped to build a strong foundation and we have benefited from it. Now it is your turn to play a role in helping Singapore forge ahead for the next 200 years," she said.