SINGAPORE - They are years apart but that did not stop a three-year-old boy from striking up an unlikely friendship with a group of foreign workers.

The boy has befriended more than 10 workers since last December, after he saw them carrying out upgrading works in the carpark at his Housing Board block.

Fascinated by construction vehicles such as the digger and road roller at the work site, the boy, whose name was given by his mother as Jake, would visit the workers twice daily.

Initially, they only exchanged waves and smiles. But after about a month, they warmed to each other.

Jake’s mother, a 32-year-old marketing manager who wanted to be known only as Ms Annie, told The Straits Times: “Initially, we were cautious. There was not much communication because they were shy and it was just waving and smiling.

“But slowly, we realised that they could speak English, and that was how the conversation started.”
She did not want to reveal the location of her home. She would say only that they live in central Singapore. 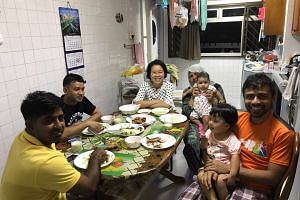 The boy was featured in a video interview by Lianhe Zaobao on Tuesday.

In the video, Jake says: “They are my good friends.”

The workers – who hail from Myanmar, Bangladesh and India – dote on the boy, whom they affectionately call “baby”.

Whenever Jake visits them, they would carry him around, shower him with kisses, and take pictures with the boy.

“Baby is very broad-minded, and he is a very good person. He will notice where everyone is, and if someone is on medical leave, he will ask where the person is,” said one of the workers interviewed in the video.

Ms Annie said: “As we got to know them personally, they started sharing more about their families back home and how Jake reminded them of their children or nephews.”

When the boy celebrated his birthday in March, they even bought him presents.

“That was truly touching,” his mother said.

Inspired by the workers, Jake said he wants to become a foreman when he grows up.

The boy, who likes to play with Lego construction sets, would build miniature figures of his new friends.

“He wants to be a foreman as he looks up to him. The foreman can drive the digger, the road roller... and he’s in charge,” said Ms Annie.

Even though some of the workers have been deployed to other work sites, they still keep in touch with Jake.

Ms Annie said: “Seeing how much the uncles missed him, and the joy he has brought them, we are happy to have formed this friendship.”