Get-well wishes for former president S R Nathan continued to stream in from visitors yesterday, a day after he was hospitalised for a stroke.

Among the many leaders, senior civil servants and long-time friends who went to see him at Singapore General Hospital were the chairman of the Council of Presidential Advisers J. Y. Pillay, Deputy Prime Minister Tharman Shanmugaratnam and Home Affairs and Law Minister K. Shanmugam.

Ms Chiang, a former Nominated MP, said she last met Mr Nathan, 92, about 10 days ago at his home.

"He was standing at the door, greeting us without any support, not even a walker," said Ms Chiang, adding that Mr Nathan told her to visit him more often. 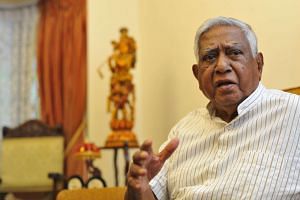 She had promised to give him some extra spicy tom yam at their next meeting, as his taste buds have dulled. "So I told him just now, 'Abang (Malay for brother), wake up. There's mee siam, samosa and spicy tom yam waiting for you.' 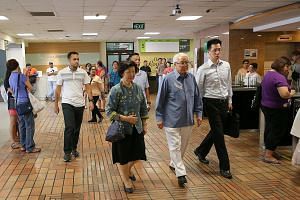 Professor Wang, chairman of the East Asian Institute at the National University of Singapore, told reporters: "Of course, we are hoping for the best.

"Nathan is someone with a lot of fight in him. I was told he was just here at the hospital on Friday for his regular dialysis."

Carpet shop owner N. J. Doshi, 85, who has known Mr Nathan for more than a decade, said after his visit: "He's a decent man and you seldom meet someone like that in your life. We wish him well and we are praying for him, but we know that he is in critical condition."

Other Singaporeans continued to express their hopes for his recovery on social media.

Facebook user Elias Sandy said: "He's a very down-to-earth person, even when he was the President... Let's all keep him in our prayers."

"As one who was twice his Proposer for the election of the President, I am glad to be associated with him as he was a great President loved by many Singaporeans," he said.