In August, Singaporean Visvanathan Balu bought $4,000 worth of rupees from a bank in Bangalore, India, thinking he could use the cash for future trips to the country.

Now the notes, which are all in 500 and 1,000 denominations, are practically worthless - unless he returns to India and exchanges them for new ones by the end of March.

Mr Balu, 49, like many other frequent travellers to India, worries about being stuck with cash that can no longer be used. They are unwitting victims of Indian Prime Minister Narendra Modi's fight against tax evaders and corruption. Those sitting on undeclared cash will have to declare it before it can be exchanged, and possibly account for it to the taxman.

On Nov 8, India, with hardly any notice, invalidated its 500 rupee (S$10) and 1,000 rupee bills and gave citizens until Dec 30 to exchange them for fresh ones at banks there. After that, they can replace the notes at the Reserve Bank of India only until March 31.

Since the announcement, money changers and Indian banks here stopped accepting the bigger notes. According to the State Bank of India's website, the notes can be exchanged only in India. 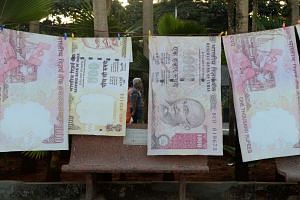 Notes from ATM became 'like toilet paper' in an hour 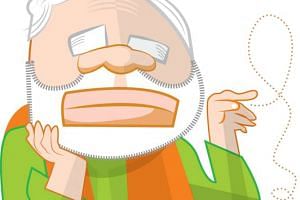 Last week, an inter-ministerial group in India was set up to address the grievances of non-resident Indians, but it has not come up with any fresh announcements or guidelines. The Reserve Bank of India has also not come up with separate guidelines for people living abroad.

Some here are counting on friends and relatives who are heading to India to change the money for them. At least two friends have asked public relations consultant Mansi Maheshwari, 31, who is going to India for a holiday later this year, to help them deposit their expired notes at banks there. To do this, she has to show the banks a letter of authorisation from her friends and proof of her identity.

Ms Maheshwari, who has less than 10,000 rupees worth of the old bigger notes with her, said she had approached two Indian banks here - ICICI Bank and the State Bank of India - but both told her she could not deposit the bills with them.

"At least I have an upcoming trip to India, so I can exchange the notes. But I have family members in other countries who do not know how to," she said.

When The Straits Times visited money changers at Mustafa Centre in Little India yesterday, most displayed signs saying that they do not buy or sell the old notes, and do not have stock of the new notes.

"Every day, I have customers crying for Indian rupees, and some ask, 'At least give us a few hundred'. But we don't have any stock," said Mr A. M. Shaik Alaudeen, a supervisor at Mustafa Foreign Exchange.

The only new rupee notes that he gets are from Indian customers who sell them to him, but those have been few and far between.

"When we get, say, 20,000 rupees, we try to limit each customer to only 5,000 rupees each. So at least we can sell the notes to four customers," he said. "We are also losing a lot of customers because of the ban. It is the year-end holidays, and many of them are going to India."

About 10 per cent to 15 per cent of his firm's business comes from trading the Indian rupee.

Mr Mohamed Rafeeq, the owner of Clifford Gems and Money Exchange, has thousands of rupees - he declined to give the exact amount - in old notes of higher denominations. "I am keeping them and waiting for good news from the Indian government. Hopefully, they can give us more time to exchange the notes."

The High Commission of India could not be reached for comment.

Mr Sam Vijaya, 52, who has about $400 worth of old rupee notes, hopes the Indian Embassy here will work with banks to allow the notes to be exchanged here. Said the ethics and compliance director: "I won't fly to India just to change this amount. If it really can't be changed here, I have no choice but to write it off."

Mr Balu, 49, a director of a media company, said: " Now, it is all rubber money. I understand they want to curb tax evasion, but it should not be at the expense of foreigners."