They will join other winners there to learn about space, experience simulator training

While many of their peers went abroad for holidays over the December school break, four Ping Yi Secondary 3 students were figuring out how to live on another planet altogether.

Having narrowed down some of the key challenges in that quest, the young aerospace buffs turned film-makers, as they tried to depict how humans would "live beyond the stars" - specifically on Saturn's largest moon, Titan.

After two weeks of intensive production - including a Sunday spent filming in astronaut suits at Punggol Beach, their closest recreation of the lunar terrain - the 15-year-olds had a five-minute video that would eventually win them an all expenses paid trip to Space Camp.

The team, comprising Nadia Sharon Moh Omar, Shawn Sia Zhi Yuan, Jerald Lee Shan Cheng and Fabian Lee Bing Jie, was presented with the award on Feb 13 at the Singapore Airshow 2020. They each won a place in the Astronaut Al Worden Endeavour Scholarship programme, which will see them attend International Week 2020 from Aug 16 to 21 at Space Camp, which is run by the US Space and Rocket Centre in Huntsville, Alabama.

They were congratulated by Mr Alfred Worden, the award's namesake astronaut and Apollo 15's command module pilot in 1971. "As a lifelong advocate for Stem (science, technology, engineering and mathematics) education and exploration, I am honoured and excited to congratulate the Titans Of Tomorrow on their winning video," said the 88-year-old in a statement.

Students from the United Arab Emirates, Chile, Poland and Britain can take part in similar "Endeavour Missions" for a chance to attend the themed camp adapted from Nasa's astronaut training programme.

They will learn about space and flight history, and get the opportunity to experience simulators and complete simulated missions.

The Endeavour Scholarship is run by the Kallman Foundation, the not-for-profit arm of US trade show organiser Kallman Worldwide.

The competition here was organised in collaboration with Singapore Airshow organiser Experia Events.

In Titans Of Tomorrow, a narrator follows the journey of two astronauts as they land on Titan and attempt to start a human colony there. 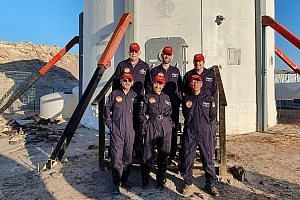 The students said that they tried to present the scientific challenges, such as differences in components of atmospheric air, in a creative and humorous manner.

On the four weeks of hard work they put in, Fabian said: "Whenever we felt tired, we thought about the once-in-a-lifetime opportunity we might have to attend Space Camp."

Jerald said that he is looking forward to actually experiencing a zero-gravity environment that simulates the weightlessness astronauts face in space, something they could not achieve in their video.

Ping Yi Secondary teacher Johnny Wee, who brought the students together for this project, said: "I found out that they had a lot of hidden strengths."

Recalling how Shawn quickly figured out facts and figures for the video, Mr Wee added: "I had full faith in their research."

Nadia said Space Camp will be a good opportunity to bond with others from around the world who have the same passion for aerospace and aeronautics. She added: "We'll get to learn about other cultures on our own planet too."