SINGAPORE - Four more statues have risen along the Singapore River next to the iconic one of Sir Stamford Raffles on Friday (Jan 4).

The Straits Times understands that the statues were erected overnight and that it is a project for the Singapore Bicentennial.

Sang Nila Utama was a Palembang prince who first saw a vision of a lion and established the Singapura Kingdom in 1299.

Tan, Munshi and Naraina were among the first settlers to arrive in Singapore in 1819 and are widely regarded as pioneering leaders of the island's main communities.

Tan was a merchant, philanthropist and community leader who contributed to starting a hospital that is named after him.

Munshi was Raffles' secretary, interpreter and Malay tutor who documented key events in Singapore after Raffles landed, and is regarded as the founder of modern Malay literature.

Naraina was chief clerk at the treasury and a local leader of the Indian community. 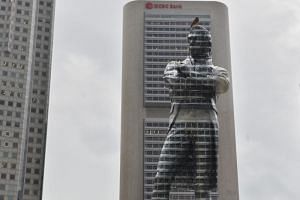 The statues follow the art stunt last Saturday where the white, polymarble statue of Raffles was half covered in dark grey paint to create an optical illusion.

On Wednesday, the Singapore Bicentennial Office revealed that the effect was created with outdoor acrylic paint in collaboration with local artist Teng Kai Wei.

On Dec 7 last year, the Singapore Tourism Board had issued a notice that the statue, which has been standing alone since 1969, would be undergoing maintenance works and hoarded up from Dec 10 to 28.

Organisers of the bicentennial have said that although the year-long calendar of activities commemorates 200 years since Raffles' landing, the anniversary is also an occasion to mark the contributions of a range of pioneers and early settlers, as well as to recognise Singapore's much longer history as a settlement that dates back more than 700 years.