SINGAPORE - Professor Kanagaratnam Shanmugaratnam, Singapore's "Father of Pathology" who died on Saturday (July 28) at the age of 97, was dedicated to his profession and the pursuit of excellence.

He was described by Prof Tan Chorh Chuan, the chief health scientist and executive director at the Ministry of Health’s Office for Healthcare Transformation, as “the pathologist to send the difficult cases which no one else could diagnose to”.

Prof Tan added: “Yet he was a very humble man. He had a brilliant mind but he was always kind and gentle with everyone – senior doctors, medical students, junior technicians – a true gentleman.”

Prof Shanmugaratnam - the father of Deputy Prime Minister Tharman Shanmugaratnam - was also known for establishing the Singapore Cancer Registry in 1967, to provide data on cancer trends in the country.

It was the first comprehensive, population-based cancer registry in South-east Asia. Prof Shanmugaratnam served as its director from 1968 to 2002.

Prof John Wong, the chief executive of the National University Health System and senior vice-president of health affairs at NUS, who shared his memories of “Prof Shanmu” at the Mandai Crematorium on Sunday (July 29), said “his dedication to excellence was constant”.

“He would show me cases he had diagnosed in the 1960s using basic tools of the past - a microscope and simple chemical stains. Using 21st century equipment, he would verify his earlier diagnoses. Very often they were accurate,” Prof Wong said.

Prof Shanmugaratnam earned a PhD in pathology from the University of London and served as the head of many international bodies over the years. These included the International Council of Societies of Pathology (1974-1978) and International Association of Cancer Registries (1984-1988). 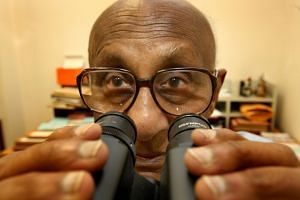 He is credited as being largely responsible for developing the World Health Organisation’s classification of nasopharyngeal carcinoma, a cancer of the upper respiratory tract.

Prof Wong said he was also critical in the establishment of NUS.

As the president of the King Edward VII College of Medicine’s students’ union, his meetings in 1947 with the British Royal Commission so impressed members that the Chairman, Lord Carr-Saunders, remarked that one K. Shanmugaratnam played a key role in the recommendation to merge the King Edward VII College of Medicine and Raffles College to form the University of Malaya in Singapore – the predecessor of NUS. This merger took place in 1949.

The King Edward VII College of Medicine became known as the Faculty of Medicine.

NUS president Tan Eng Chye, in a statement on Sunday (July 29), paid tribute to Prof Shanmugaratnam, calling him a much respected and revered luminary in the community, and an inspiration to all who knew him.

“His keen intellect and dedication to his work and research in pathology were legendary,” said Prof Tan.

“The university mourns the loss of a giant in Singapore medicine. Our deepest condolences go out to Prof Shanmugaratnam’s family, friends and loved ones during this difficult time.”