SINGAPORE - The founder of a chain of aesthetics clinics was on Thursday (Dec 5) ordered to refund $30.7 million to an investor, after the High Court found that he had made fraudulent claims to mislead the businesswoman into injecting the funds.

At a meeting on board his yacht in October 2013, Dr Goh Seng Heng told Madam Wang Xiaopu that he was willing to sell his shares in Aesthetic Medical Partners (AMP) to her at a discounted price of $500 each.

Dr Goh falsely claimed that he had previously sold his shares in AMP - the parent company of a chain of clinics under the PPP brand - at $600 to $700 each.

The doctor also told Madam Wang that if she invested in AMP, he would not sell his shares to others without her permission.

He did not disclose that he had entered into prior agreements with two parties, which would require him to sell or transfer his AMP shares.

In September 2014, Dr Goh met Madam Wang in Guangzhou, China, and told her that a group of minority shareholders wanted to sell their shares at $450 per share.

He did not disclose that these shareholders were in fact willing to sell them to Dr Goh at $350 per share, and that he would be making a profit of $100 per share. 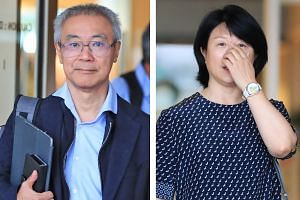 She eventually paid a further $20.7 million for 46,000 shares before she found out that he was selling his shares to a third party.

In a 119-page judgment on Thursday, Justice Woo Bih Li declared that both contracts are rescinded as they had been obtained as a result of fraudulent misrepresentations.

Dr Goh has to return Madam Wang $30.7 million in exchange for the re-transfer of the 66,000 shares she bought.

Justice Woo dismissed Madam Wang's case against Dr Goh's daughter, Dr Michelle Goh, who was the chief executive officer of AMP from 2011 to 2015.

The judge noted that Dr Michelle Goh was not present at both meetings and it cannot be implied that she had made the representations by virtue of her position.

Madam Wang, who runs a skincare products company in China with her husband Sun Huaiqing, was introduced to Dr Goh by her relationship manager.

Represented by Senior Counsel Jimmy Yim, she alleged that Dr Goh made misrepresentations that induced her into signing a memorandum of understanding to invest in AMP.

Dr Goh denied making the representations, saying there was no discussion of figures or financials at the yacht meeting. He also claimed he was not fluent in Mandarin.

Justice Woo said Dr Goh's credibility was severely undermined by his "vacillating testimony". At trial, the doctor gave seven versions as to when he was informed that the final price was $500 per share.

The judge found that Dr Goh's command of Mandarin was "fairly good", pointing to idioms and poems he posted on Facebook.

Madam Wang said she was induced into signing a second MOU after Dr Goh told her that the minority shareholders were only willing to sell their shares at $450.

The judge said that had Dr Goh simply remained silent as to what price the minority shareholders would sell their shares at, he might have been entitled to pocket the difference.

However, the sale was essentially a sale from the minority shareholders to Madam Wang. The judge said the mechanism of going through Dr Goh was to hide the fact that he was making the $100 difference in prices.