SINGAPORE - She was rising through the ranks working in treasury services at a local bank.

But in her heart, Ms Ng Ling Ling knew this wasn't her calling in life. At age 29, she followed her heart and joined the social service sector.

Growing up in a three-room Housing Board flat and seeing some neighbours around her struggle with problems such as drug abuse and gambling, she felt she could do her part and reach out to those who needed help.

So in 2001, she joined the National Council of Social Service, where she eventually became the managing director of Community Chest, the council's fund-raising arm, and helped to raise millions for charity.

On Friday (Aug 24), Ms Ng, now 46, was named the Woman of the Year by women's magazine Her World for her work in guiding Community Chest.

She held the position of Community Chest's managing director from 2013 to June this year.

On Friday, she was presented the award by President Halimah Yacob at the Shangri-La Hotel, during a gala dinner attended by about 280 people. 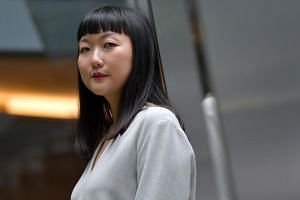 Her World, a monthly women's magazine published by SPH Magazines, has been giving out the Woman of the Year award since 1991 to recognise women with outstanding achievements that have been noticed by the public and earned them wide respect.

This year's judging panel was helmed by businesswoman Jennie Chua, who was the Her World Woman of the Year in 1999. She headed a team of seven judges, which included Hype Records director Ken Lim and Straits Times senior writer Wong Kim Hoh.

Ms Ng's many achievements in Community Chest include helping to raise a record $800 million in donations under the Care and Share movement in 2015. She also led her team to increase the organisation's average annual donations from $40 million to $50 million.

She also headed efforts to secure donations for the Enabling Village, a community space dedicated to integrating people with disabilities in society.

Ms Ng has since moved to the Ministry of Health as the director of community engagement and head of projects in future primary care.

Winning the award came as a surprise to her, said Ms Ng, as her former colleagues had secretly nominated her for it.

"Growing up as a rather shy and introverted girl in a simple family, living in a small flat for most of my life, I would have hardly imagined being here... today to receive this award and being counted in the list of women achievers whom I greatly admire," she said.

"I hope this award will encourage more of my fellow Singaporeans to play a part in creating a caring and inclusive society, where no one is left behind."