SINGAPORE - When a legless body wrapped in black trash bags turned up in a suitcase in Syed Alwi Road in 2014, forensics officers worked through the night to examine the evidence.

"We had to transport the bags back to our office very carefully," said senior crime scene specialist Geraldine Ng, 30. "Any print that we found on the trash bags could give us an idea as to who was possibly the person who wrapped the body," she added.

Within 24 hours, they uncovered a fingerprint lead.

Ms Ng works in the Criminal Investigation Department's (CID) forensics division, which marked its 40th anniversary on Thursday (Nov 9) with a day-long conference.

Held at the Police Cantonment Complex, the event showcases the division's transformation, and was attended by around 200 people.

At the event, Deputy Commissioner (Investigations and Intelligence) Tan Chye Hee said the police will continue to sharpen their capabilities in forensics.

The forensics division, which also played a role in cases involving mass casualties, such as the collapse of Hotel New World in 1986 and Nicoll Highway in 2004, has come a long way. 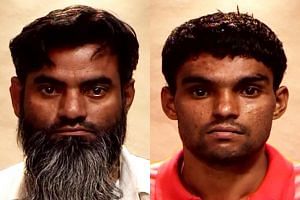 Legless body in suitcase: Duo to hang for murder

In the past, officers had to plough through archives manually to search for fingerprint matches, said officer in charge of the fingerprint examination team Lee Mei Fun, 54, who joined the police force in the 1980s.

Technology has since made a big difference, with an electronic fingerprint matching system in use now, she added.

Crime scene specialist Albert Pung, 63, said: "We started DNA analysis in 1991. When I started (in 1981), if the blood stain was smaller than the size of a 20-cent coin, we didn't collect it as we probably couldn't get DNA from it."

He added: "Today, if I take a swab of your phone, I can get your DNA... science and technology has advanced so much."

Younger officers such as Ms Ng follow in the footsteps of pioneers from the scene of crime unit, which was operationalised in 1977 as a team of 12 officers.

"We had no formal training at the time. My only experience arose from my investigation work and on-the-job training," said security consultant Michael Won, 76.

He set up the unit in 1975, drawing from his experience in presenting cases to court, where he learnt what evidence is needed and may be admitted.

"Our investigations were based on physical observations and (the) retrieving of objects, depending very little on technology," he said.

Before the unit was formed, officers with different specialisations had to be called in separately to document the scene, he added.

"The quality of evidence revealed depended on the enthusiasm of the investigation officer," he recalled.