Foreign domestic workers make up the bulk of foreigners in Singapore who take loans from licensed and unlicensed moneylenders, voluntary welfare organisations said yesterday although they could not provide exact figures.

Pastor Billy Lee, executive director of Blessed Grace Social Services, said he has been getting more distress calls from maids and their employers in recent years.

"Many of these maids come to Singapore with no money and a mountain of debt to their agents... they shouldn't be borrowing any more money," he said, adding that many maids run into problems servicing their loans as their average salary is only about $6,000 a year.

The Ministry of Law (MinLaw) and Ministry of Manpower (MOM) announced on Thursday that new loan caps will be introduced to protect foreigners working or residing here and their employers from the effects of overborrowing.

The new limits set by MinLaw will apply to holders of work passes, long-term visit passes, short-term visit passes, dependant's passes and student passes, and will come into effect later this year. There are currently no loan caps for this group of borrowers. 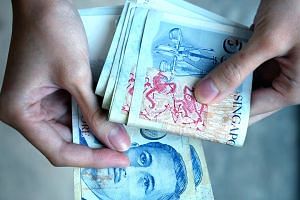 Credit Association of Singapore president Peter Tan said the caps might mean moneylenders will not be able to lend as much to foreigners, but he added that even without the caps in place, most moneylenders are already prudent when extending loans to maids.

"I believe maids should be allowed to take loans, but within a reasonable amount and that amount should be capped," he said.

An employer recounted the nasty experience she had after her maid borrowed a total of $8,000 from both licensed and unlicensed lenders within the span of a month.

Marketing professional L. Cheah, 43, who declined to give her full name, said that after sending her maid back to the Philippines, she was left to deal with her debtors.

"She gave my contact numbers to the loan sharks and they started hounding me," she said.

Following the advice given to her by the police and Blessed Grace Social Services, Ms Cheah changed her home phone number and refused calls from unfamiliar numbers. That was two months ago, but she still lives in fear that someone would turn up at her door demanding money.