In the heart of Chinatown is a top-rated cooking school where tourists and executives learn to whip up popular local dishes, such as Hainanese chicken rice, nasi lemak and char kway teow.

But no professional chefs dish out tips and instructions there. Instead, eight stay-at-home mothers and seniors run the classes.

Food Playground, in Sago Street, advertised on job recruitment sites to reach out to such mothers. Some young mothers also referred their parents to the school. 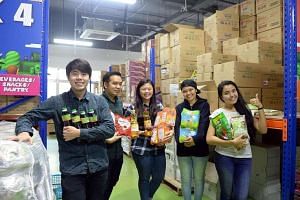 Get inspired by causes that make a difference

Being interested in social causes, both agreed from the start that their business should have a social mission. Mr Tan, who has over 10 years of experience in the tourism industry, had helped some seniors when doing volunteer work. 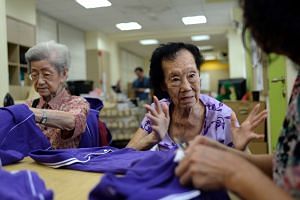 Ms Tan, who has two children aged three and nine and was a stay-at-home mother for four years before starting the business, said: "Flexi-work jobs do not come by easily. When faced with many challenges, some mothers make the hard decision to stay at home."

But such a decision had a negative impact on her friends and herself.

She said: "I could see how much self-confidence was eroded from them. It's a scary thought for them - when their children grow up and don't need them around as much. They wonder 'what's next?' and have no answer for themselves.

"As someone who previously had a good corporate career, I also know that staying home for years can really lower one's self-esteem."

Her experience of training salespeople in a 10-year career in corporate marketing has served her well in training the culinary instructors in skills such as public speaking and facilitating workshops.

Still, she faced some challenges. For instance, it took time to train a woman who had not worked for 12 years to speak confidently and to avoid using Singlish.

"The cooking was never the issue. I just had to train them to conduct classes in a fun and structured manner," she said.

Within six months of being set up, Food Playground was listed on the TripAdvisor website as the best one among "classes and workshops in Singapore".

It still holds that spot and has more than 500 reviews, with more than nine in 10 giving it the highest rating of "excellent". In 2013, it also won one of the Singapore Experience Awards - the top awards for the tourism sector here - for Best Enrichment Experience.

Ms Tan said: "Chefs tend to focus on cooking techniques and the menu, but our focus is always on the customer experience. The classes are designed to fulfil a greater purpose - getting to know Singapore better through learning about its food culture, or promoting team-building - not just to teach people how to cook."

The classes are also hands-on and not limited to demonstrations by instructors, like in some cooking classes at community clubs, she said.

Tour designer Julia Kelly, from Australia, learnt to cook Hainanese chicken rice at a class last month. Said the 42-year-old: "There were reviews saying that it's so much fun, it's really sociable, and you learn a lot - and that's exactly what I got. The instructors are very good at explaining, and it was like one generation teaching cooking skills to another."

Culinary instructor Lesley Lim, 47, was a stay-at-home mother for 16 years before she joined Food Playground two years ago. She used to hold sales and marketing jobs.

"I tried to rejoin the workforce several times but it didn't pan out. Many companies were looking for full-time staff and, even for part-time jobs, the working hours didn't fit my schedule," she said.

Now, she can drop her children off at school before work, and pick them up after work.

But they had to get used to her busier schedule.

"Initially, I was always at their beck and call, but this changed when I started work. That took a long time for them to get used to, but now they're okay with it.

"I love working here. I teach people to do something that I enjoy and love. Having people who want to learn something that I'm passionate about gives me a great sense of achievement," she said.

• For more information, go to www.foodplayground.com.sg