Demand for food to be delivered to homes and workplaces is soaring. With delivery firms struggling to attract enough riders, The Straits Times has found that those who get on their bikes are landing big pay rises - but also facing the threat of seeing their jobs being taken over by technology.

The 25-year-old, who transports everything from steaming plates of pad thai to sandwiches for What To Eat, is not the only one receiving a larger slice of the pie.

As Singaporeans embrace having food delivered to their doorsteps, the demand for delivery staff has soared - and wages for the service have risen with it.

Mr Paul Lim, founder and president of industry body Supply Chain Asia, estimates that earnings have gone up by an average of 50 per cent over the past two years, while the number of food-delivery riders is rising by about 15 per cent a year.

Food-delivery services have emerged as a bright spot in a tepid job market. According to Manpower Ministry figures, the average gross wage of a delivery rider was $1,914 in June last year. 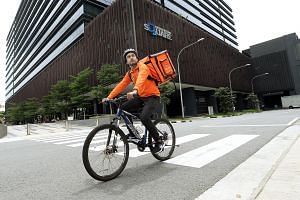 Bicycles faster than motorbikes for deliveries

Firms have also seen their pool of delivery staff grow. What To Eat has 30 full-time delivery staff and 50 freelancers. Both pools have been growing by about 25 per cent a month over the past year.

A full-time rider's earnings there have grown by about 40 per cent in the last two years to about $3,500 a month, according to business development director Nikola Rudic.

But a delivery rider's life is no walk in the park. The hours are long: Full-timers at What To Eat make about 20 deliveries from 11am to 10.30pm, five days a week, while freelancers work on average about 41/2 hours a day, 21/2 days a week.

"The rate of growth has been much faster because of the increased awareness of different food-delivery options among Singaporeans," said Mr Rudic.

At Food Panda, one of the biggest players in the market, orders have been increasing by 25 per cent a month this year. It has seen its delivery fleet surge to 2,500 riders since it started building the fleet in March last year. When it started out in April 2012, restaurants it partnered handled the deliveries.

However, 90 per cent of Food Panda's delivery crew is made up of part-timers.

With the surge in orders, firms are finding it difficult to hire riders, and struggle to cope during peak periods like Chinese New Year, Mr Lim said. He added that potential riders generally perceive the job as involving long hours on the road and offering few prospects of skills development or pay rises.

Mr Rudic agreed that it is "very difficult" to hire riders as more firms are competing for a limited supply.

UberEats, which was set up in May, said it had trebled its pool of drivers over the last eight weeks.

Meanwhile, NTUC assistant secretary-general Ang Hin Kee believes firms may turn to technology to meet their needs. Delivery jobs could be carried out by driverless or autonomous vehicles, for instance. He suggested that if delivery riders want to boost their pay, they could learn how to run such systems.

And if existing companies do not provide the chance for them to upgrade their skills, they can take up career-conversion programmes.

For Mr Tan, the job and its benefits are satisfactory for now.