Floating solar panel systems that harness the sun's energy to generate electricity will be operational at two reservoirs by the middle of next year.

The systems at the reservoirs will run at 1.5 megawatt-peak (MWp) each, and the electricity generated by them will directly power Bedok Waterworks and the raw water pumping stations at Bedok and Lower Seletar reservoirs.

The energy generated by the two systems will be equivalent to that consumed by about 800 four-room Housing Board flats for a year, and will reduce the PUB's carbon emissions by around 1.5 kilotonnes annually - or the equivalent of taking 300 cars off the road.

Together with an existing 0.5MWp rooftop solar array at Bedok Waterworks, the floating solar systems will produce enough green power to satisfy 30 per cent of the installations' total energy requirements.

In June, PUB said that one of the world's largest single floating solar PV systems will find a home in the waters of Singapore's Tengeh Reservoir by 2021.

The tender for the Tengeh Reservoir system, which will be the nation's first large-scale floating system of solar panels to power water treatment processes, is expected to be awarded by the end of the year.

Covering an area the size of about 45 football pitches, the floating solar farm at Tengeh Reservoir will operate at 50MWp.

It can power the equivalent of up to 13,500 four-room HDB flats annually. 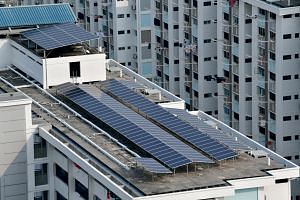 Taking up just 0.5 per cent of Lower Seletar Reservoir and 2 per cent of Bedok Reservoir's surface area, the systems will not affect the operational and recreational uses of the reservoirs, PUB said.

"Solar power is a viable source of renewable energy in sunny Singapore," said the agency. "While the majority of solar PV systems are deployed on land or rooftops, water bodies such as reservoirs, with their large surface areas, can also be used to harness solar energy."

By 2030, Singapore wants to ramp up its solar capacity by more than seven times from current levels, and increase the current 260MWp of installed solar capacity to 2 gigawatt-peak.

This is enough to meet the annual power needs of about 350,000 households in Singapore, or about 4 per cent of Singapore's total electricity demand today.

A version of this article appeared in the print edition of The Straits Times on October 31, 2019, with the headline 'Floating solar panel systems to be ready at 2 reservoirs next year'. Subscribe
Topics:
More
Whatsapp Linkedin FB Messenger Telegram Reddit WeChat Pinterest Print Purchase Article Copy permalink