SINGAPORE - A flash flood caused by heavy rain surfaced again in one stretch of Singapore's shopping strip Orchard Road on Saturday (May 26), leaving some vehicles stuck in deep murky water that came up to mid-tyre level.

In a tweet at 3.45pm, water agency PUB said both lanes of Kramat Lane, which is near the Concorde Hotel, were flooded and advised people to avoid the area.

In a statement on Saturday night, PUB said the flood subsided within 10 minutes, adding that the nearby Kramat Road is a “local depression” and that it would assess the need and feasibility of raising the road.

The agency also said it expects the coming completion of the Stamford Detention Tank and Stamford Diversion Canal to improve the situation at Kramat Road.

These are two major projects being built to protect Orchard Road, which was hit by a series of flash floods between 2010 and 2012.

The canal will relieve Stamford Canal of a portion of water, while the detention tank will hold water temporarily so less water flows into Stamford Canal during heavy rain.

The projects will be completed by the third quarter of this year.

PUB said in December last year that it would spend $500 million over the next two or three years to upgrade existing drains as a safeguard against floods. This was on top of the $1.2 billion it had already spent on drain improvement works since 2011.

Photos posted by readers showed that the adjacent Cavenagh Road next to Orchard Plaza was also flooded.

PUB had issued high flood risk alerts for several other central areas after heavy rain fell across parts of the country.

It quoted the National Environment Agency (NEA) in a tweet at 2.18pm, saying heavy rain was expected over many areas from 2.45pm to 3.30pm.

It later posted about water levels reaching 100 per cent in measuring points at Exeter Road and Somerset Road as well as Tanjong Pagar Road and Craig Road.

Flash flood at Kramat Lane. 2 out of 2 lanes are affected. Avoid the area. Issued 15:45 hours. #sgflood

Shopkeepers and workers in the Kramat Lane area said they have been used to being hit by flash floods whenever it rains but were relieved that the latest bout subsided relatively quickly in about 30 minutes.

Mr Steven Loo, a 57-year-old owner of a retail store at Orchard Plaza, told The Straits Times that he was unsurprised when he saw the flood waters along Cavenagh Road, which lies between Orchard Plaza and Concorde Hotel.

Mr Loo, who has worked there for 24 years, said the last time he saw a flash flood in the area was about three years ago. 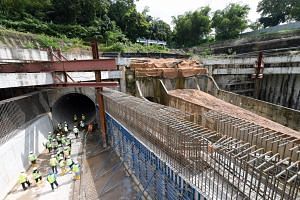 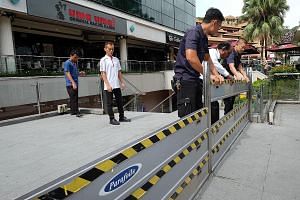 "It really depends on the rain. Today, the rain was unusually heavy, it fell continuously for more than an hour. It started around 3pm. The water cleared at around 4pm when the rain stopped," said Mr Loo. He added that a car was towed away and many others made U-turns to avoid the flash flood.

However, he noted that the water subsided quickly, within half an hour from when the rain stopped.

A staff member at the Boon Tat Street Barbeque Seafood across the road from Orchard Plaza, who gave his name as Mr Wong, said he was similarly unperturbed.

The 28-year-old said that he had seen worse floods in the area, including the one around last Chinese New Year.

His co-worker who has worked there for 10 years, but declined to be named, said that he had seen three to four floods in his time there.

As half the restaurant has non-sheltered seating, he said that it was fortunate that the flood occurred in the afternoon, when business was quieter.

They also noticed a black car that was stuck in the flood, which has been featured in several videos posted online. They said the couple in the car was trapped for an hour or so.

In its update on Saturday night, PUB said the second half of May was expected to be wetter than the first half of the month.

It added that flash floods may still occur when there is intense rain and that it would provide flash flood warning and alerts through timely situation updates.

“We urge the public to exercise caution and avoid stepping into or driving into flooded areas,” it said, adding that the public can stay tuned to radio broadcast and check PUB’s Facebook www.facebook.com/PUBSg or PUB’s mobile app “MyWaters” for flood updates.