ACTING CLASS STARTED IT ALL

Mr Aloysius Pang's ticket to showbusiness came after he joined an acting class organised by Mediacorp when he was nine years old. His first show was a children's drama titled Xiao Fei Ren (1999).

He stopped acting when he was 14, saying that it was because the pressure of being in the public eye got to him.

"Back then, I pretty much wanted to be a normal person. Whenever someone did a double-take (when they saw) me, I felt alienated from the public," he said.

A COMEBACK AT AGE 22

He returned to acting when he was 22 years old. His first project was the film Timeless Love, released in March 2012. He followed it up with Channel 8 drama Poetic Justice, It Takes Two and the second season of the popular police series C.L.I.F.

Mr Pang said in 2015: "I hope I can reach new heights with my acting. It is more than a passion; acting is a part of me."

ONE OF THE EIGHT DUKES

Three years after his comeback, he clinched Best Newcomer at Mediacorp's Star Awards ceremony in 2015. 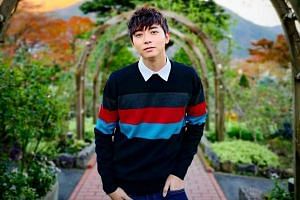 He was one of eight young male stars picked by Mediacorp to form the Eight Dukes - a new generation of stars.

After 18 years with Mediacorp, Mr Pang parted ways with the broadcaster in April 2017 to work on a new business venture in wood plastic composites with his eldest brother Jefferson, who came up with the idea of selling eco-friendly products, which included outdoor decking.

Mr Pang's parents are contractors, and he is the youngest of three sons. He graduated with a diploma in management studies from the Singapore Institute of Management University.

Though some felt it was a pity he was leaving the industry at the height of his popularity, he said at the time that acting remained his first love and he would still take on filming projects on a freelance basis.

In his first Channel 8 drama since the end of his contract with Mediacorp, he stepped into a unique role - playing a pregnant alien father in the sci-fi series My Friends From Afar.

Mr Pang, who is now signed to local talent agency NoonTalk Media, played a character who arrives on Earth, gets pregnant and gives birth. The series premiered in November 2017.

He said he relished being back on set, and was also relieved at the chance to do what he loves again. "I was desperate for an opportunity. I was worried that as a freelancer, jobs are not guaranteed. I told my boss that I will take on any suitable role. I have been itching to act, and I feel relieved to be able to do so again."

Since then, he has starred in the Toggle original series Love At Cavenagh Bridge and drama series 29th February, among others. He had been due to start shooting Channel 8 romantic drama My One In A Million next month. The role will now be recast.