SINGAPORE - Five men, aged between 26 and 32, have been arrested for their suspected involvement in gang-related activities at Envy Dance Club which was recently in the news for a fight that broke out on its premises on Sunday morning (Nov 12).

The police said in a press release on Wednesday (Nov 15) that it was alerted to an online video on Tuesday, showing several men shouting gang-related slogans at the nightspot located at St James Power Station.

Officers from the Criminal Investigation Department (CID) arrested the five men within 24 hours, after extensive ground enquiries and follow-up investigations.

Police investigations against the men are ongoing.

"The Police take a very stern view of gang-related activities and will continue with tough enforcement efforts and come down hard on those who choose to be associated with gangs and their activities," the police said in the press release. 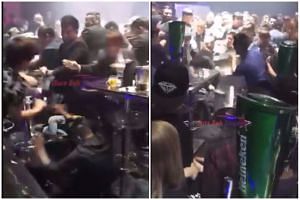 Footage of the video that had gone viral on Tuesday showed chaos breaking out at the club, with people punching and kicking one another and throwing items around.

Three people, aged 23, were arrested in relation to the brawl.

Anyone found guilty of being a member of an unlawful society under section 14(3) of the Societies Act, chapter 311, can be fined up to $5,000, jailed up to three years, or both.