Their trip is part of the Universal Periodic Review (UPR) process, which the Republic is undergoing before the UN Human Rights Council next month.

The UPR looks at the human rights situation in each of the 193 UN member states every 41/2 years, and this is the second time Singapore is being reviewed.

Activists from countries up for review, like Singapore, are invited to lobby the permanent missions of UN members in Geneva one month before the UPR session.

A Singapore Government delegation will present a national report on human rights ahead of the Jan 27 UPR session on Singapore.

Sayoni, Second Chances and Home are also representing a coalition of 10 local NGOs that includes Aware and Think Centre. 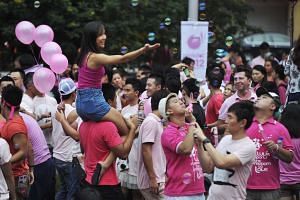 Singapore's first UPR in 2011 saw only two activist groups - Maruah and Think Centre - in Geneva. Then, Singapore received 143 recommendations from countries including France, Oman, the Czech Republic and Indonesia.

Maruah president Braema Mathi, who will travel to Geneva, said she found her 2011 experience useful, and credits the UPR for Singapore eventually ratifying UN conventions on human trafficking and disabilities since then.

"The system in itself is a good system of getting more and more countries to become more accountable on how they are maintaining and enhancing human rights in their own countries," she said. This year, she plans to focus on civil and political rights and the electoral system.

The civil society groups are spending about $3,000 each to send a representative to Geneva who has five to eight minutes to give their views to UN delegations at what are called UPR pre-session meetings.

Oogachaga does not have a speaking slot but will set up meetings to lobby UN members on recommendations in their joint report with Pink Dot: Employment protection for LGBT persons, bullying and harassment in schools, legal recognition of LGBT groups, and access to healthcare and social services.

"Through these meetings, we hope that more recommendations on LGBT human rights issues could be made during the UPR session in January," said Oogachaga consultant Bryan Choong.

In June, civil society organisations here submitted their group or individual reports to the UN. They were also consulted in January by the Ministry of Foreign Affairs (MFA), which is preparing Singapore's national report.

The UPR will be based on Singapore's national report, together with civil society reports and a UN report on Singapore's commitments and engagement with UN human rights mechanisms.

S. Rajaratnam School of International Studies political scientist Alan Chong said some of these NGOs see their participation as a way to shape Singapore's human rights standards in line with international norms, and "a way to hurry or pressure government policies towards certain directions".