SINGAPORE - Remember dining at the Glass House, and taking photos with the 'Love' sculpture in front of it?

Park Mall and the Glass House will soon join other bygone Singapore landmarks in Singaporeans' memories as redevelopment for the site is on the cards.

Fish & Co, the restaurant at the Glass House, said on Wednesday (Jan 20) that its outlet there will be closed for good come June 2016.

Here's a look at the Penang Road mall through the years:

Fish & Co has been at the Glass House for 14 years, and many young Singaporeans held birthday parties and gatherings at the restaurant.

"If you have gone to school in Singapore, chances are, you have celebrated a classmate's birthday at the Glasshouse at least once where all the staff are on deck to 'sabotage' the birthday celebrant," Fish & Co said in their press release.

As part of the restaurant's farewell promotion, customers who present a photo of a "birthday sabotage" at the Glass House can get a free dish from Fish & Co.

Those in their 30s and older will remember the American bistro restaurant that first occupied that space - TGI Friday's which served burgers and Mexican fare.

2. Don't you just LOVE that sculpture?

After a meal, few could resist taking a photo at the 'Love' sculpture outside.

It's not entirely gone, just moved to the courtyard of Winsland House II, which is also on Penang Road.

It was the largest ever produced by American pop artist Robert Indiana then. There are many versions of the sculptures around the world.

3. Before Park Mall, there was Supreme House

Before it became Park Mall in 1992, older Singaporeans shopped at Supreme House through the 1970s and 80s.

The 14-storey building, which was built in 1971, housed departmental store Metro and had a well-known coffee house named Skillets at first, then Silver Spoon. The "multi-purpose" building also had offices and conference halls.

It was sold to Wing Tai in 1989, which turned it into Park Mall. The mall focused on Asian fashion until 1994 when it became a furniture hub. 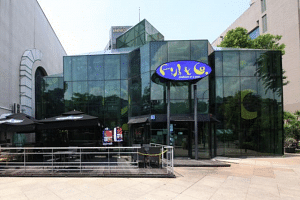 Fish & Co restaurant at Glass House to close in June

The 24-hour coffee house, a hip hangout in the 1970s, was known for its circular design and hostesses who ushered guests to their tables.

First named Skillets, the eatery was at the centre of a tussle between the owners - estranged husband and wife - Mr Neo Tai Kim and Madam Foo Stie Wah.

Two new office buildings with retail space are planned for the site.

Suntec Reit bought the mall from Wing Tai in 2005. Last year, it was sold to Park Mall Investment, a joint venture company of which Suntec Reit has a 30 per cent interest.

Have memories of the Glass House, Park Mall or Supreme House? Share them with us in a Facebook message and send us your photos too.