When Ms Shermaine Ang met a few female police officers during a career chat session at her school Hwa Chong Institution (HCI) last year, she asked them if it was difficult working in a male-dominated environment.

"They said no because everyone in the police force, whether male or female, cares for the same cause and if you are capable, you will be given opportunities," said the 19-year-old.

That cemented her desire to join the police force, because it made her realise that women have an equal role to play in protecting the country, contrary to what she saw portrayed on television, where most front-line officers were men.

"The officers also told me that they were able to see a side of society that you cannot see in the ordinary working world… And I am someone who cares for people. I felt these aspects of the job were important to me," she said.

Yesterday, Ms Ang became the first woman to receive the Singapore Police Force Scholarship (SPFS), one of the most prestigious scholarships awarded by the Public Service Commission.

The SPFS was first awarded in 1979. This year also marks the 70th year of women in the police force.

Ms Ang was among 23 recipients of scholarships given out by the Ministry of Home Affairs in a ceremony at the Istana yesterday.

Minister for Home Affairs and Law K. Shanmugam, who was the guest of honour, noted that more students were interested in a Home Team career this year, compared with previous years. 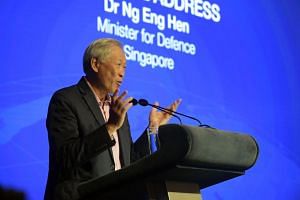 9 out of of 93 PSC scholarship recipients in 2019 are poly graduates, an all-time high

"The percentage of Public Service Commission scholarship applicants who put the Home Team as their first choice was the highest in the last five years, ranking third among all scholarship schemes, after the Teaching and PSC (Open) scholarships," said Mr Shanmugam.

The other three recipients of the SPFS are Mr Justin Quek and Mr Warren Liow, who are both 19 and from Raffles Institution, and Mr Yiik Chia, 20, from HCI.

The SPFS is awarded annually to students who have excelled in their studies and co-curricular activities, and who display strong leadership qualities. They must excel in the Officer Cadet School (OCS) as well.

Ms Ang will read history at the University of Oxford.

He said it was his six-year stint as a scout, from secondary school to junior college, that made him consider pursuing a career in the uniformed services.

He hopes to join the Criminal Investigation Department (CID), which his father was a part of.

"I used to ask my dad about his cases, but he never shared anything because they were confidential. To me, (CID) is the most mysterious and exciting part, which I have to find out more about on my own," he said.

On being the first female recipient of the SPFS, Ms Ang said: "I feel thankful that I have the opportunity, regardless of gender, to be awarded this scholarship and I hope this will show that females also care about defence. I believe that protecting the country is everyone's job and not just the men's."