SINGAPORE - Visitors will not only be able to walk into the new Funan mall when it opens in June this year, they will be able to cycle into and through it.

The revamped complex will feature a 200m indoor cycling path that runs through and around it, making the mall the first in Singapore to allow cyclists and users of personal mobility devices (PMDs) to ride through it.

To make things more interesting, LED light strips on the cycling path, activated by ceiling motion detector camera, will light up whenever there is movement on the path.

The indoor cycling path is an extension of the outdoor shared cycling and walking path along North Bridge Road.

At a media preview on Tuesday (May 21), CapitaLand Singapore’s managing director of retail Mr Chris Chong said the addition of an indoor cycling path is Funan’s way of supporting the Land Transport Authority’s (LTA) car-lite movement.

“If we want to support the car-lite movement, we must give shoppers alternatives and choices. By incorporating (an indoor cycling path), we are giving them an option. We’ve got to walk the talk,” he said.

He said the cycling path will mainly serve working professionals in and around Funan who cycle to their office during morning peak hours. 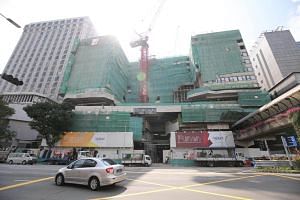 A bicycle hub on the first floor of the new mall has amenities which should appeal to cyclists including four shower cabins, eight lockers and a bicycle pump and repair station.

There will also be 166 bicycle bays. Safety should not be a concern for non-cyclists, according to the building’s developer, CapitaLand Mall Trust.

There will be safety features - the indoor cycling path will be fitted with speed-regulating safety strips for cyclists and PMD users. During mall operating hours from 10am to 10pm, signs will be put up along the path to encourage riders to dismount and push within the mall.

The former IT mall closed in mid 2016 for redevelopment, which cost $560 million and will nearly double the floor area of the complex to 887,000 sq ft.

The centrepiece of the revamped mall is a six-storey predominantly steel structure called the Tree Of Life. It houses 20 retail pods for brands to showcase their products on a limited period pop-up concept and two open studio spaces that can be combined to accommodate large workshops and classes.

Local jewellery brand Carrie K is among the tenants who have signed up for one of the pods.

A 5,000 sq ft urban farm operated by urban farming outfit Edible Garden City is located on the seventh floor. It will be open to the public and visitors can dine at Noka, a farm-to-table restaurant just adjacent to the urban farm.

A green rooftop garden, decked out with lounge chairs, offers visitors the view of Marina Bay and Fort Canning from either end of the building.

Mr Chong said: “The new Funan is about enriching the shopping experience and enriching our shoppers’ lifestyles. At the end of the day, when our visitors come to the mall, we hope they walk away more knowledgeable about the stuff they see and experience here.”