Shuttle buses were being provided on Sunday to serve commuters during a full-day closure of some MRT stations.

Queues stretched for about 100m, but cleared quickly as the shuttle-bus frequency was quite high. Those in line waited for less than five minutes.

Many commuters were initially caught off guard on Sunday by the first of two scheduled full-day closures of certain stations on the East-West Line (EWL) and North-South Line (NSL). However, they said the exercise has been well organised.

Directional signage to four parallel shuttle bus services - towards Outram Park, Joo Koon, Tuas Link and Choa Chu Kang - was placed prominently on walls, and more than 400 staff and crowd marshals were around in shifts to direct commuters.

To help shift workers get home and to work, there was also an express shuttle bus service between Boon Lay and Outram stations; it stopped at Jurong East and Buona Vista stations as well. It involved just two buses, which left Boon Lay at 5am and 5.15am, and Outram at 6.10am and 6.25am.

Until Dec 31, 19 stations on two lines - those on the 17-station stretch from Tiong Bahru to Tuas Link on the East-West Line, as well as Bukit Batok and Bukit Gombak stations on the North-South Line - will close at 11pm on Fridays and Saturdays, and open at 8am on Saturdays and Sundays.

These stations will also be closed all day on two Sundays - Dec 10 and Dec 17.

The shuttle buses, driven by more than 700 bus drivers, ply the same route as the MRT trains. The fares for these shuttle bus services follow the rail fare structure.

Mr Vincent Gay, director of operation support and resource management at SMRT Buses, said some commuters have complained about the walk to the shuttle bus queues, which are rather spaced out.

He said this arrangement was to prevent the road network from becoming congested.

Madam Lai Hun Fua, 50, a service employee at a shopping centre, said she left her home in Jurong West an hour earlier to take the shuttle bus from Pioneer to Jurong East station, near where she works.

"I was afraid that it would be very messy," she said.

"But they (crowd marshals) gave us brochures and told us about the different shuttle bus routes, so it was quite easy to plan my trip."

Her journey, including waiting time, was 20 minutes, instead of the usual eight minutes.

Secondary 4 student Muhammad Imran, 16, said he forgot that the closure was happening on Sunday.

"It's a bit inconvenient and I think I'll be late for my religious class in Marsiling. But the staff gave clear directions," he said.

An executive secretary in her 60s, who gave her name only as Ms Goh, said the shuttle buses arrived quickly.

"I think a full-day closure once in a while is good to maintain the line. It also reminds us not to take the train service for granted," she said.

She took the shuttle bus from Clementi to Jurong East to attend church.

The next full-day closure will be on Dec 17.

Train operator SMRT said last month that this is being done to accelerate resignalling works and move the EWL to a new signalling system by June next year, instead of the end of next year.

Compatibility issues between an old signalling system and a new one caused two MRT trains to collide on Nov 15.

At a media briefing on Sunday, SMRT gave reporters a look at works going on at Jurong East station during the full-day closure. 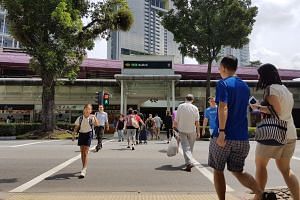 Full-day MRT closures, shorter hours: What you need to know

They include replacement of track circuits and the maintenance of platform screen doors, jet fans and station lights.

Mr Keith Lim, principal fellow for signalling and communications at SMRT Trains, said he has two teams which are working to replace three track circuits during 5½ hours of the closure. It normally takes two to three nights during normal maintenance hours to replace just one.

"With this extended engineering hours, we can shorten the time required for replacement," he said.

SMRT is in the process of replacing all 1,300 track circuits on the NSEWL. So far, about 40 to 50 have been replaced.

Mr Siu Yow Wee, director of building and facilities at SMRT Trains, said up to 160 SMRT workers will be doing maintenance work on station facilities on Sunday.

He noted that certain works, such as the replacement of components in platform doors, require track access.

"We can't do much during the normal engineering (non-service) hours from 1.30am to 4.30am. Station closure helps us to hasten the corrective maintenance," he said.