SINGAPORE - A week after Terminal 4 opened, Changi Airport has put up new signs and video content at the boarding area to inform travellers that they can use the automated gates - only if they did automated immigration clearance.

Those who did not should head to the manual counters instead, to be processed for boarding.

The initiative, following ground observations and feedback from airlines, aims to reduce confusion for travellers and channel them to the correct counters to facilitate smooth boarding.

Changi Airport Group will monitor the situation and assess if more needs to be done, spokesman Ivan Tan told The Straits Times.

A week after T4 opened, the terminal handled its full load for the first time on Tuesday (Nov 7) yesterday, after the AirAsia group of four carriers and Vietnam Airlines moved in. 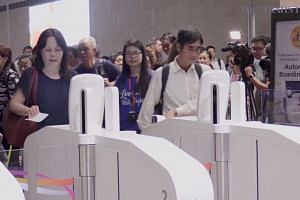 There are now nine airlines, including Cathay Pacific and Korean Air - the first two to operate out of the new facility - at T4.

After months of intensive tests, and with the deliberate decision to stagger operations to allow some time for systems and processes to stabilise, it was a fairly smooth launch for AirAsia, said its Singapore chief Logan Velaitham. "There's nothing like going live, so although we had done all the tests, including live flights, we were still a bit jittery and prepared for some teething problems. Fortunately, and to our pleasant surprise, all systems worked well," he said.

The only hiccup was that some passengers turned up at T1, where AirAsia used to operate from.

"There were about 80 of them through the day, but the airport had already pre-arranged buses to ferry them to T4, so there were no missed flights," Mr Velaitham said.

AirAsia will continue to reach out to as many customers as possible, to inform them of the move, he added.

The expansion is timely, coming when airlines are adding more flights to Changi, on the back of growing demand for air travel in the Asia-Pacific region.

While many travellers who have used the new terminal have given it the thumbs up, some were upset that the skytrain, which connects T1, T2 and T3, has not been extended to T4. Instead, shuttle buses - with no steps so that bags can be easily carried - are provided.

With the nine airlines moving to T4, there is more room available now at the other terminals. At T1, rows 13 and 14, which AirAsia used to occupy, are now empty.