Companies should not be resistant to change, in this age of technology and disruption. They should look at hiring fresh graduates to boost the adoption of new technology, and hiring people with relevant skills from previous jobs who can be trained to fill particular roles.

These were among the main messages from the four-person panel of The Straits Times and SkillsFuture Singapore Future of Work Forum, held yesterday at the School of the Arts. The forum was moderated by The Straits Times' head of training and talent development Lydia Lim.

Speaking to an audience of 370 made up of working adults and business owners, Google Singapore country director Stephanie Davis said companies should not view the rise of machines with fear, but rather embrace them by equipping workers with relevant skills.

"In order for us to thrive and to coexist, technology and humans, we have to dedicate ourselves to learning throughout our career, and recognise that it's not just the next generation," she said. "All of us will have to spend time learning and understanding what this change is bringing about, and how we should equip ourselves and our companies." 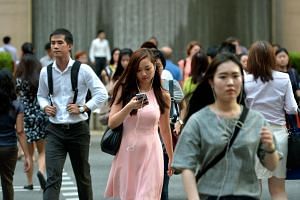 No significant rise in number of freelancers

Another way to get workers to improve their skillsets is to introduce an element of competition, said Samsung Electronics Singapore president Lee Jui Siang.

When workers are put in a tough, competitive environment, they will be forced to adapt, and to come out on top. Mr Lee added that hiring millennial workers would also push older workers to move with the times. The adoption of technology is more "intuitive" for younger workers, so the more mature, middle-aged workers will be influenced and start to adapt.

Every large organisation has a built-in immune system (to change), that is basically made up of senior executives who were promoted, not because they are adaptable, but because they are guardians of the existing way of doing things, and they believe in scaling up what has always been done. So this is a challenge.

MR INDRANIL ROY, head of the Future of Work Centre of Excellence, Deloitte.

LIFELONG LEARNING FOR EVERYONE

In order for us to thrive and to coexist, technology and humans, we have to dedicate ourselves to learning throughout our career, and recognise that it's not just the next generation. All of us will have to spend time learning and understanding what this change is bringing about, and how we should equip ourselves and our companies.

One of the difficulties for freelancers is when they want to go for training, they do so on their own, unlike in a company. It's their own costs. That's why when you look at industries dominated by freelancers, training participation tends to be lower. Freelancers tend to focus on securing the next project, rather than building up a portfolio of skills.

Recruitment was another topic the panel touched on, with Mr Indranil Roy, head of Deloitte's Future of Work Centre of Excellence, saying recruiters should change what they look for when matching jobs and candidates.

He said most recruiters are incentivised to fill positions quickly, resulting in "convenient" hiring practices that match candidates based on what they had done before, rather than considering other areas they can contribute in based on their skillsets. "When a displacement happens, it is important for a recruiter to find out what are some adjacent things that the person can do. What are the additional possibilities or career moves that this person can make?"

He added that the onus was also on companies to give those workers a chance, pointing out that the Government funds the training needed to upgrade the employee's skillsets.

He also said large companies are generally resistant to changing the way they do things.

SkillsFuture Singapore chief executive Ng Cher Pong said, however, that there is slowly a shift in the mindset of company heads to thinking about the uncertain and disruptive future. He also emphasised the role that education plays in preparing people for the future work environment, by giving students the mindset of continual learning.

He said any changes to the education system have to be done in a systematic manner, and its strengths kept. So far, some changes have included less focus on academic grades, and more on letting individuals discover their strengths and interests.

The next Straits Times and SkillsFuture Singapore forum, to be held on July 21 at the Lifelong Learning Institute, will be on the Future of Skills. Registration is closed.