In the first of a four-part series on disruptions in education, Mr Salman Khan, founder of the Khan Academy and Khan Lab School, talks about why and how education is ripe for disruption

It was perfect timing - taking a disruptive approach to traditional ways of learning, for the age of disruption.

That's the worldwide phenomenon that is the Salman Khan effect. His non-profit educational organisation, the Khan Academy, has become famous for giving free online tuition with an effectiveness that Singaporean parents forking out big bucks for extra tuition can only marvel at.

And it all began because Mr Khan's cousin Nadia was struggling with maths in 2004 and he decided to tutor her remotely. "Then the rest of the family heard there was free tutoring," he says, and more relatives started taking part.

The demands got too much. Then a friend suggested he film the tutorials, post them on YouTube and the family could view them at will.

The videos became an Internet sensation and Mr Khan quit his hedge fund job in 2009 to focus on his education endeavour.

He went on to take his ideas and practices into a bricks-and-mortar classroom setting as well, launching Khan Lab School for students from kindergarten to Grade 12 (ages five to 18) in 2014 at his home base of Mountain View, California.

As the school is meant to be a testing ground for new approaches to learning, Mr Khan hopes to share the best practices that the school and Khan Academy develop with educators around the world.

As he says, it is "an open source approach to educational innovation". For example, instead of grouping learners by age, Khan Lab School does it by level of independence, based on skills like time management and self-regulation. 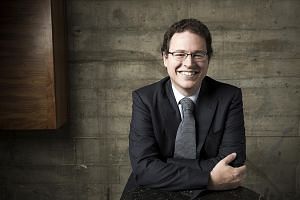 Other differences from the traditional way of learning include the fact that it takes a competency-based - or as they call it, mastery-based - approach to learning, where the focus is on conceptual understanding and mastery of content before students move on to the next level.

Every week, students identify their unique needs and set goals that determine the school work they undertake - such as a maths concept they hope to master, or a book to read and review.

They learn skills in a variety of ways, from meeting a teacher for a "pop-up class" to going into blended learning platforms like Khan Academy or Newsela, which allow them to move at their own pace.

The afternoons are usually given over to broad, real-world projects.

Each student's progress is charted so teachers can identify where they are struggling and offer assistance.

Half the teachers act like tutors, helping with academic work. The rest, called advisers, help learners to know themselves and understand their own learning.

Older students mentor younger ones, and community members such as entrepreneurs, artists and Khan Academy employees, including Mr Khan himself, visit classes regularly to share their expertise.

Time is set aside from 4pm to 6pm for electives like art, sport, robotics, dance and music classes.

Since opening, the school has quadrupled in size to 140 students.

When he decided to tutor his cousin Nadia, in Louisiana, the US-born Mr Khan was working as a financial analyst after earning degrees from the Massachusetts Institute of Technology and Harvard.

The online videos he produced then, supplemented with exercises, are still going strong today. Mr Khan's friendly style, coupled with his knack for making difficult maths sums seem simple, caught on with YouTube viewers and his audience grew from a handful of family members to millions.

His supporters include Microsoft founder Bill Gates, who has publicly stated that he was a huge fan of Khan Academy and was using it with his children.

Mr Khan lived on his savings after he quit his job, until he started receiving significant donations, including from Google and the Bill and Melinda Gates Foundation.

He has no regrets moving from a lucrative career in hedge fund management into education, telling The Straits Times: "On a day-to-day basis, I do exactly what I would do if I had all the money in the world and my family is comfortable. So what else can you ask for?"

1 You were a well-paid hedge-fund guy. Why go into education?

Before I was a hedge-fund guy, I was a mathematics guy and before that, I spent many summers trying to research education, so that's always been my passion. I got rejected for the Rhodes Scholarship twice - my goal was to do a PhD in education at Oxford University.

Even in the hedge-fund world, I thought: "If I could do really well over the next 10 to 15 years, I could retire and start a school on my own terms.

2 Why is the Khan Lab School called a "lab" school?

Because we want to always question set norms and practices in education. Questions such as: Why have vacation, why not have full-day, full-year schooling? Why don't we decouple independence level and academic mastery? 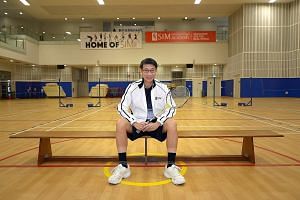 And of course, the big question, given what the world is going to be like over the next 50 years, what should education be like? So we have ideas and we want to test them.

When a school or system works well, the temptation is not to want to change it. You must have that in Singapore as well. But that's why the word "lab" is there, because we want to keep pushing the school out of its comfort zone so that it keeps challenging its own assumptions.

The team at the school is constantly gathering data, self-reflecting and re-evaluating - willing to press the reset button, if necessary. We hope that their learning, protocols and practices can ultimately be shared with the world - providing an entry point for other pioneers.

3 You believe strongly in mastery learning. Why?

It doesn't mean that you have to be the absolute master of every skill before you move on, but you should have reasonable proficiency, a reasonable foundation, before moving on.

Say, for maths, I get 70, 80 per cent of a topic. That means I didn't know 20 to 30 per cent of the material, but the whole class is then forced to march into the next subject, probably a more advanced subject like algebra. And we keep getting pushed and those gaps keep accumulating so at some point, we get to an algebra class and nothing makes sense.

With mastery learning, students get to revisit a topic until they understand it well. Then they will be more confident in moving to the next level.

4 Despite being a progressive school, why do you emphasise content?

There are two schools of thought. There's a traditionalist approach where the kids have to have a lot of practice, they've got to do multiplication tables and we've got to test them. And then you have the ultra-progressives who go: "No, no. We want our kids to make stuff and explore."

And my personal view is both. I am quite traditional in that I believe students should have fluency of subject matter, a core knowledge base.

5 I was surprised - you believe in tests.

We do testing to plot our students' growth. As educators, we need to understand why some students are learning something well and why some are lagging behind.

We need to talk about it to the students as well. And it's not about whether you are a C student or you're an A student. It applies to the students who are three grade levels ahead - if he or she didn't grow much in that three months, we will have a conversation. And if a student was a bit behind but is progressing well, we'll say keep doing what you're doing.

6 You are also going to introduce Preliminary Scholastic Aptitude Tests (PSAT) and SATs, as well as third-party benchmark tests such as the Programme for International Student Assessment (Pisa) test conducted by the Organisation for Economic Cooperation and Development (OECD).

It's easy to pat yourself on the back if your students are doing well. But in fairly affluent areas, you have to ask if it is indeed the school that is making the difference. If all the kids come from families where both parents are college educated and can offer the extras like tuition, it's almost like the kids are going to do fine. This might be happening in Singapore as well.

You have good students to begin with and all the variables are in your favour, then how do you know if you have added value? That's why you need these third-party benchmark tests.

7 At Khan Lab School, there is a lot of focus on collaborative and peer-to-peer learning. Why do you emphasise this?

If you visit the school... it really feels like a family. I've seen a six-year-old skin her knee and the first two responders are 12-year-olds because the teacher might be on the other side of the field. And that's really powerful.

As you develop your individual skills, you also develop your leadership skills and your ability to explain. So it's win-win. When you explain something, you learn it better.

And I do think sometimes a 16-year-old who's just learnt the material but has developed some communication skills can sometimes explain a topic better than the 30-or 40-year-old who just assumes a lot.

8 How would you define success for Khan Lab School?

Education is a long-term endeavour. It will take many years - 10, 15 years down the road - to show if our students are more successful in life. But in three to four years, we will be looking at whether our kids are getting strong college admissions and if they are thriving there because of their high school experience.

We also want to make Khan Lab School into a hub where we can collaborate with other educators.

9 What's next for Khan Academy?

Well, we're most well-known for maths and we're already providing much more than maths. We've got lessons in world history, grammar, economics and art history, just to name a few.

Looking even further out, I am thinking of some form of certifications. So, for example, right now you can learn algebra in Khan Academy but there's no way to show the world that you know algebra. So I would love in the next five years to have some way for someone who has mastered a subject through the Khan Academy to sit for a test and show that they have, say, high school equivalency in this subject.

10 What about in higher education?

But you're going to see more higher education options such as 42, the tuition-free coding school, where once you get in, students are put through several projects and internships to learn a set of skills in three to five years.

A version of this article appeared in the print edition of The Straits Times on January 15, 2018, with the headline 'Firing up an education revolution'. Subscribe
Topics:
More
Whatsapp Linkedin FB Messenger Telegram Reddit WeChat Pinterest Print Purchase Article Copy permalink