SINGAPORE - This year's River Hongbao kicked off on Sunday (Feb 3) night with a 10-minute fireworks display, the longest in the event's history.

A mainstay on Singapore's calendar of Chinese New Year festivities since 1987, this year's edition is one the first major events of the year to commemorate the Singapore Bicentennial. The event was launched by Prime Minister Lee Hsien Loong at The Float @ Marina Bay.

It featured a special 10-minute fireworks display at 10pm, on top of one minute-long displays earlier at 8pm and 9pm.

The special displays, which will also take place on Monday (Feb 4), Saturday and Sunday (Feb 10), are by award-winning teams from Australia, China, Italy and the United States.

These teams have performed over global icons such as San Francisco's Golden Gate Bridge and the Sydney Harbour Bridge, and at major international events such as the Beijing and London Olympics.

Realtor Vienson Tan, 48, was at the event with his girlfriend and her parents for the second year running. They were especially excited to catch the fireworks, and soak in the festive atmosphere.

Towering over the floating platform is an 18m-tall God of Fortune, which covered visitors with a golden shower of luck and fortune, in the form of gold flakes. 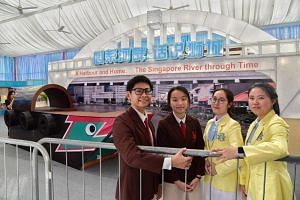 Before pressing a button which lit up all the lanterns and exhibits simultaneously, PM Lee wished Singaporeans good health and a prosperous New Year in Mandarin.

The River Hongbao features 22 lanterns, including the 12 zodiac animals, that light up the floating platform in a myriad of colours.

The largest lantern set is "Our Garden, Our Home", which is 60m long and 10m tall. It depicts events in Singapore's history, from Sang Nila Utama naming the island Singapura, or Lion City, to Singapore's growth as a transportation hub.

Mr Hari Yuvaraj, 28, a doctor, attended River Hongbao with his parents and cousins for the first time.

"I know which year I was born in, so I went to check out my zodiac. Found out that I'm a horse, so it's going to be a good year in terms of wealth and health," he said.

Visitors can also view an exhibition located within a gigantic junk boat replica, "A Harbour And Home: The Singapore River Through Time", highlighting the Singapore River's transformation over the years.

The River Hongbao 2019 is held from 2pm to 11pm daily till Sunday, Feb 10. Opening hours will be extended to 1am on the eve of Chinese New Year. Admission to the festival is free of charge.