SINGAPORE - A fire raged for at least three hours in the early hours of Saturday (Aug 3) at two warehouse units in Bukit Batok.

The units, which are on the fourth floor of the industrial building, were used to store personal mobility devices (PMDs) and electrical items.

The Singapore Civil Defence Force (SCDF) said in a Facebook post that it was alerted to the fire at 2024 Bukit Batok Street 23 at about 1.20am.

SCDF officers had to force their way into the units to contain the fire, they said.

Three handheld water jets and an aerial water monitor were used to bring the fire under control.

Firefighters extinguished the fire in about three hours, they added.

There were no reported injuries. 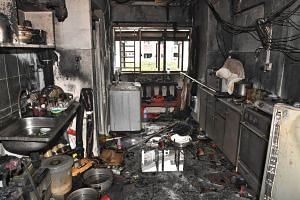 LTA reviews PMD safety certification deadline after PMD fires: Types of fires in homes and ways to fight them

The Straits Times understands that one of the warehouse units belongs to a wholesale firm called CJ International, which has listings for PMDs on its Facebook page.

A 30-year-old staff member of CJ International told Chinese-language newspaper Lianhe Wanbao they will be assisting the SCDF in their investigations, and declined further comment.

According to the paper, solar panels on the roof were burned too.

The other affected unit houses Sim's Lighting Gallery, according to the building's directory.

SCDF said it is investigating the cause of the fire.