SINGAPORE - Seven shophouses in Geylang Road were engulfed in flames in the early hours of Sunday (March 17), resulting in a three-hour operation involving some 60 firefighters, which ended close to 5am.

In a Facebook post at 1.47am, the Singapore Civil Defence Force (SCDF) said that it had been alerted to a fire at 643 Geylang Road.

It also shared photos and videos of SCDF officers working to bring the raging fire at the row of double-storey shophouses under control.

In a later update at 4.48am, SCDF said that the fire involved a total of seven shophouses units, including five that were fully engulfed in flames.

It said that the fire had spread quickly, as the shophouse units shared a common roof, and furniture and other combustible materials were closely packed in some of them.

There were no reported injuries.

A total of 17 emergency vehicles and about 60 firefighters were deployed.

SCDF said that at the height of the operations, nine handheld jets and three water monitors from the aerial appliances were used to bring the fire under control. 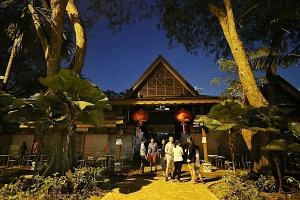 The fire was extinguished in about three hours.

Several Facebook users also posted videos of the blaze, with some motorists advising others of road closures and traffic jams in the area.

One user wrote: "My friend and I decided to buy duku langsat at Lorong 36 Geylang fruit shop. What greeted us was a horrifying inferno swept at Lorong 33 Geylang shophouses!

"When we left the place, the fire was still on. I hope there are no casualties.

"Kudos to Police Officers, SCDF Officers and Fire Fighters for doing a good and worked bravely."

Another user wrote that Lorong 31 to Lorong 35 in Geylang was closed to traffic.

As of about 5am, SCDF said that damping down operations to prevent the fire from rekindling from the hot burnt surfaces were ongoing.