SINGAPORE - Seventy people, including patients and staff, were evacuated after a fire broke out at Singapore General Hospital (SGH) on Monday afternoon (Aug 19).

The Singapore Civil Defence Force (SCDF) responded to a fire at 1 Hospital Drive, at the basement 1 level of Block 2, at 1.50pm.

The small fire, which involved an electrical component, had burnt itself out before firefighters arrived, said SCDF.

Due to smoke from the fire, SCDF evacuated 70 people from the premises as a safety precaution.

No injuries were reported in the incident, and SCDF is investigating the cause of the fire.

Preliminary investigations by SGH showed that an electrical component inside a scanner had overheated and emitted smoke, said the hospital's chief operating officer Tan Jack Thian.

The scanner was shut down immediately. The hospital arranged for patients to have their scans done using other scanners in the department after the premises were cleared of smoke and SCDF had given the clearance to re-enter, he added. 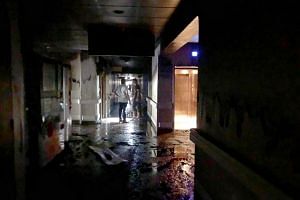 The hospital also made arrangements for a few patients to have their scans re-scheduled.

"We apologise for the inconvenience caused by this incident," said Mr Tan.

A patient told Chinese-language evening paper Shin Min Daily News that the corridors were filled with smoke and, after about an hour, people were allowed to enter the building.