SINGAPORE - Finance Minister Heng Swee Keat, 54, collapsed at a weekly Cabinet meeting on Thursday (May 12) after suffering a stroke.

He was attended to by doctors from Tan Tock Seng Hospital.

In an update at about 11.28pm, the Prime Minister's Office (PMO) said Mr Heng had a sudden stroke due to an aneurysm, which is a localised weakening of a blood vessel. He underwent initial neurosurgery to relieve pressure in his brain due to the bleeding. The aneurysm was successfully closed.

He will remain under close monitoring in the intensive care unit of Tan Tock Seng Hospital.

Deputy Prime Minister Tharman Shanmugaratnam will be covering the duties of the Minister for Finance with immediate effect.

An earlier statement from the PMO said Mr Heng had collapsed at 5.34pm during a Cabinet meeting. He was taken to the hospital immediately, and a CT scan showed that he had a stroke.

Following the announcement, Prime Minister Lee Hsien Loong said in a Facebook post: “Hope Swee Keat will be alright - he is a valuable member of my team.” He said that Mr Heng had suddenly collapsed at the weekly meeting and three doctors in Cabinet attended to him immediately. An ambulance was called and he was taken to Tan Tock Seng Hospital, added Mr Lee.

The Straits Times understands that the three doctors in Cabinet were Defence Minister Ng Eng Hen, Foreign Minister Vivian Balakrishnan and Minister of State for Education and Communications and Information Janil Puthucheary.

Dr Balakrishnan, who was an eye surgeon before he entered politics, wrote on Facebook following the PMO update on Mr Heng's condition: "Thank you to the wonderful staff of NNI & TTSH for their great care of our dear colleague and friend."

Dr Ng is a cancer surgeon by training, while Dr Janil is a paediatrician.

Dr Ng had said earlier: "Cabinet colleagues are expectedly shaken because Swee Keat collapsed suddenly during our meeting this afternoon. We managed to resuscitate him but he and his family will now need all our prayers and support as he undergoes critical procedures and treatment for the stroke."

At about 9.50pm, Emeritus Senior Minister Goh Chok Tong revealed in a Facebook post that Mr Heng had just undergone surgery and doctors were "doing their best to deal with his problem". He added: "He is a core member of the fourth generation leadership team. We need him."

Health Minister Gan Kim Yong, in a Facebook post at about 10pm, said the doctors at Tan Tock Seng Hospital were doing their very best for Mr Heng.

Earlier, President Tony Tan Keng Yam wrote: "Heard the news about Minister Heng Swee Keat. Hope he has a speedy recovery. Our thoughts and prayers are with him and his family during this difficult time."

Within minutes of the announcement, a stream of get-well wishes were posted on Facebook by ministers, MPs, ordinary Singaporeans and residents from Tampines GRC, where Mr Heng is an MP.

DPM Tharman wrote on Facebook: "Let’s hope and pray for Heng Swee Keat, who is being treated in hospital after suffering a stroke during Cabinet meeting late this afternoon. He is one of Singapore’s finest sons, and a leader with much promise."

Law and Home Affairs Minister K. Shanmugam said he noticed that Mr Heng has been looking very tired and that he was carrying an "incredible load". He added: "I have been telling him that he was overworking so much that it will affect his health."

Transport Minister Khaw Boon Wan, who was not at the Cabinet meeting, said he was shocked when he heard the news on radio.

Speaker of Parliament Halimah Yacob described Mr Heng as a "thoughtful and patient man, deeply committed to Singapore". She wrote:"Let's pray for his speedy recovery."

Minister for National Development Lawrence Wong said what happened at the Cabinet meeting "came as a complete shock".

Minister for Culture, Community and Youth Grace Fu, who was on a study trip in Hong Kong, wrote: "We were shocked and saddened, and have our eyes glued to our phones throughout our dinner with the women leaders of Hong Kong."

Mr Heng is an MP for Tampines GRC. He was first elected there in 2011.

He has held several high-profile positions in the past few years, and has been identified as a core member of the fourth generation of political leaders. 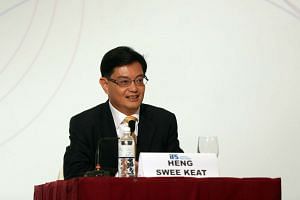 Finance Minister Heng Swee Keat suffers a stroke: Some things to note about the condition

He was appointed a full minister on being elected in 2011, holding the education portfolio. After last year’s election, he was made Finance Minister and presented his maiden Budget on March 24.

He also chairs the Committee on the Future Economy, and headed the steering committee that oversaw the SG50 Jubilee celebrations.

He started his career in the public sector as a police officer after being awarded a Singapore Police Force scholarship to read economics at Cambridge University, England.

He met his wife Chang Hwee Nee while studying at Cambridge. She is now a deputy secretary at the Ministry of National Development. The couple have two children. He moved from the police force to the civil service in 1995 and rose quickly through the ranks.

Fellow Tampines GRC MP Baey Yam Keng said: "I just saw Minister Heng during lunch today and he was his usual self. Therefore I was shocked that he collapsed during the subsequent Cabinet meeting. I wish him a speedy recovery."

Mr Baey told The Straits Times that Mr Heng joined others at a pre-Cabinet lunch.  "There were some discussions, nothing unusual," he said.

Another Tampines GRC MP, Mr Desmond Choo, added: "Dear Tampines Residents, Pls continue to keep Min Heng in your prayers as he recovers from a suspected stroke. Tampines GRC has always worked together as a team to serve our Tampines residents. While he recovers, we will look after residents from Central on his behalf. He will be alright."

The opposition Workers' Party (WP) and its members also sent their regards to Mr Heng.

The Singapore Democratic Party said it is saddened by the news.

The Reform Party said Mr Heng and his family "are in our thoughts and we send our best wishes for a speedy and full recovery".

The Facebook pages of PM Lee and Mr Heng were flooded with well-wishers hoping for Mr Heng's speedy recovery, soon after the news broke.

Facebook user Yen Chua said Mr Heng is "a gentleman & he has Singaporeans in his heart".

User Yen Ling Lam recalled being on a short working study trip with Mr Heng, noting that it was clear from their meetings that he was "truly one who puts Singapore first".

Zue Ismail said the Tampines MP was soft-spoken and friendly when he met her and her daughter outside, while Joey Chen Peiqi said Mr Heng's health should be the "top priority" before he returns to serve the people and nation.

Media waiting for updates on Heng Swee Keat at TTSH